What I Wrote This Month

In case any of you are interested in my writing, here's my latest novella.  Turn off your Adblocker if you can't see it.  It's an Amazon picture link.

Posted by Cheap Meals for the Big Eater at 2:32 PM No comments:

The title to this post is a quote from my mother.  We're at the Treasure Resort in Pahrump, and have decided to stay here until the end of November (weather permitting).  It's easily the nicest RV park that we stay at.  And since we lived in Pahrump for 2 years prior to going full-time, my mom attends her old church here and knows how to drive herself around on her own.

Things have changed since we were here last April.  Namely... 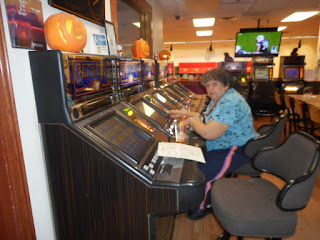 There's a casino in the cafe here now!!!  And that suits us fine.  We like to play the games now and then.  Having a smoke free casino right were we live is Awesome!!!

I've also taken up bird watching.  A lot of humming birds were buzzing in front of my window, likely because a past resident had a feeder for them.  I went out to get them one and decided to get a regular feeder too. 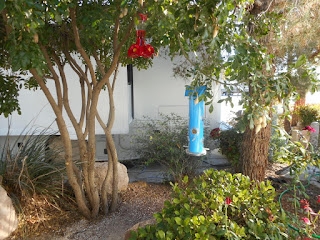 Here's the view out my window now.


It turns out that lots of people have humming bird feeders, but I haven't seen any seed feeders besides ours.  And boy has it been a hit!!  Gorgeous pink birds have been stuffing their beaks while larger birds dig through the litter on the ground to get what they drop. 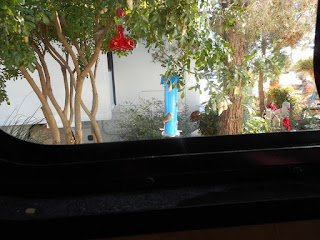 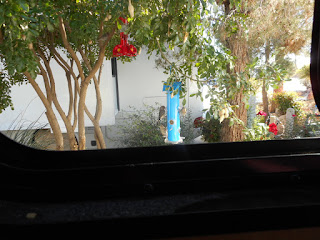 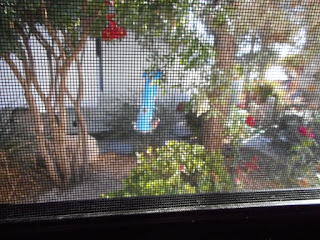 I'm trying to get a good picture of the pink males of these birds but it's so hard!!!  Hopefully one came out.  They're so beautiful!

We're still on the Personal Trainer Diet, and will remain on it forever probably.  I've had to modify things due to weakness.  My body isn't able to do straight Atkins without a large intestine.  I had to take two days off to recover my strength.  Now I'm starting again with a new plan my body can handle.  BANZAI!!!

One more attempt to photograph that pink bird.... 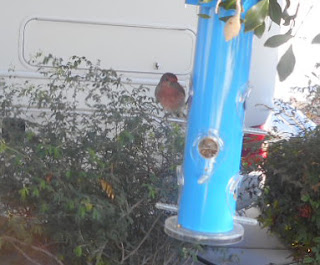 Posted by Cheap Meals for the Big Eater at 4:09 PM No comments:

We are at the Treasure Resort in Pahrump, NV, taking advantage of their full gym for a month to kick our weightloss into high gear.  I had a drink last night and gained two pounds along with a puffy face!  Won't be cheating with alcohol ever again!  My diet, The Personal Trainer Diet, that sends you all the food, is still perfect for me.  Delicious food.  Cheap.  And my appetite no longer spikes due to blood sugar.  I saw it spike last night after I cheated with a drink.  I don't want to go back to that roller coaster.

If you've been thinking about trying this diet, today (October 11) is the day to do it since they're doing $100 off.  That means $269 gets you a month worth of food (and it's really delicious!)  I say that's cheaper than buying groceries.  Please check it out with my link:  http://bit.ly/1PTOkqG
Posted by Cheap Meals for the Big Eater at 1:50 PM No comments:

I say we're home again because we're back in Pahrump, NV, where we used to live.  We'll be spending a month here using the sweet gym at the Nevada Treasure Resort to kick our weightloss (thanks to the Personal Trainer Diet) into high gear. 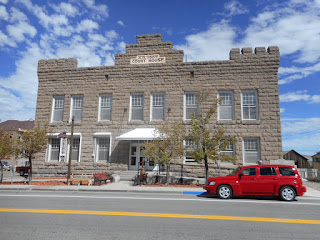 I felt bad about not regaling you with pictures from Tonopah.  So here are pictures from the next town south of Tonopah, Goldfield, NV.  What's Goldfield all about?  Here's the plaque in front of the courthouse (above) to tell you: 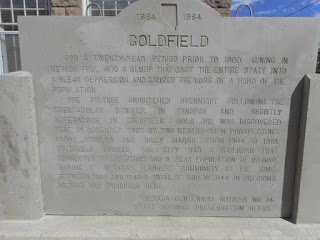 It's a nice stone carved plaque, but honestly, this is a boom/bust town currently in it's bust cycle, the way Tonopah is.  Here's the typical buildings you see there: 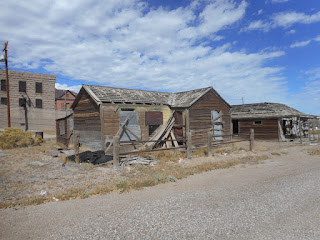 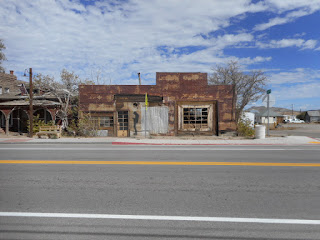 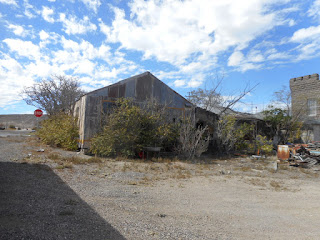 I peeked inside one of these derelict mining era buildings and here's what I saw: 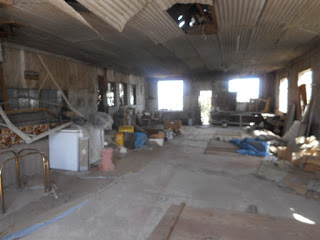 So...yay?  Don't say I never give you pictures!

We stopped there for breakfast on the way down to Pahrump.  The pickings were slim, but we still managed to get two omelets for our trouble.  One wonders how people get by in tiny 'no supermarket' towns like these.  It was a little depressing.

Posted by Cheap Meals for the Big Eater at 10:15 PM No comments:

Night of Peace and Quiet

Last night I kind of got the appeal of boondocking.  It's not just finding beautiful scenery or convening with nature.  Boondocking like we did last night gave us PEACE AND QUIET.

We were sardine canned into that last RV park.  As I said, I hit someone's awning as I drove in because there were large RVs crammed into limited space spilling out into the road.  We couldn't open the door of the SUV without hitting our RV steps.  We had to bend our side mirror in or the people in the RV next to us would bump it as they came out of their RV.

Being so crammed in there meant that every conversation came into your space.  People were extremely inconsiderate.  They thought nothing of having an outdoor powwow at 2am.  Because all these RVs around them were just empty buildings, apparently.  Not homes filled with people TRYING TO SLEEP!!  More than once I slammed my window shut loudly to give some inconsiderate jerks a hint.

But voices weren't the only source of noise.  Fricking motorcycles.  Loud.  Beat up.  And with riders who loved to rev rev.  I guess having a loud noisy thing between their legs helped make up for other short comings.  There was a note posted on the doors of the restrooms saying that people needed to get mufflers for their horribly loud motorcycles.  As if that helped.  The noise wasn't only during the day, but at night.  Sometimes very late.  I was flabbergasted at how inconsiderate these people were.  No one else existed except for them.  They had to be raised in barns or something.  I just don't get it.

Then of course, there was the drama.  Not just the domestic violence in the RV right next to us, that required us to call the police, but screaming fights all the time.  Often spilling into the street.  We saw two women beating each other with clenched fists and trying to knock each other down in the middle of the narrow road.  They were fighting over 'dope' because one of the girls kept screaming about it.  It took meth-lab Harry (my name for a horrible mean old jerk who appeared to have a meth lab in his RV) to come out and scream obscenities at them to make the fight stop.

Okay, Meth-Lab Harry.  He was often washing a tupperware container full of stuff outside with a hose, guarding it carefully, not wanting anyone to see what he was cleaning.  His RV REEKED of paint thinner.  He had people coming at all hours of the day for 15 second visits, and, here's the clincher, HIS RV HAD A CHIMNEY.  Meth lab?  Yeah, probably.  Besides the fact that he was putting that horrible stuff out on the street, he was just a HORRIBLE person.  He berated his wife constantly.  They sometimes had shout fests, but usually it was just him telling her to shut her f**king mouth.  He was also yelling at everyone with dogs to, 'Shut that f**king dog up.'  And he kicked a girl out of another guy's RV (I don't get the situation, but apparently he had power over this other guy) and when she tried to come back, because she was made homeless, he said, and I quote:  'You don't f**king live here anymore, bitch!  Get over it!'  And slammed the door in her face.  Meth Lab Harry has a reckoning coming, and I will not shed a tear when he's taken down.

So, last night we were in this BLM land.  A half mile from the highway.  Nothing but mountains and clouds.  Complete solitude and peace.  Oh Lord...last night was just what my spirit needed.
Posted by Cheap Meals for the Big Eater at 10:21 AM No comments: