We didn't have to check out from the RV park until this morning, but we left last night.  We were anxious to get out of there.

We've moved to a BLM boondock between Carson City and Dayton a mile off of Highway 50. 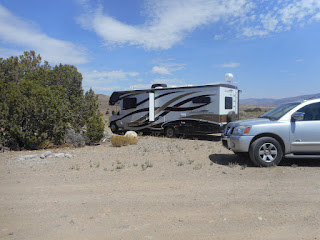 It's close enough to Reno to continue with my mom's medical treatment, but free, quiet, remote, peaceful--just how we like it.  However...it's clear from the trash that this is a popular spot... 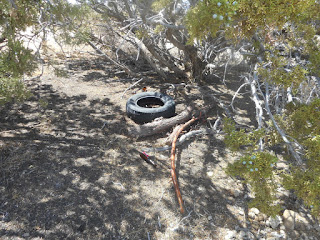 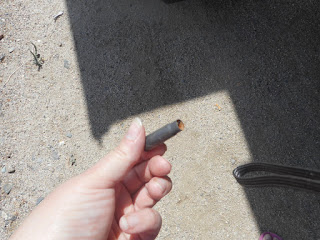 Meh...whatever.  There's no one here now and we feel relatively safe.  We just hope someone from the Bureau of Land Management doesn't come by and think we're responsible for all this trash.

While we were at the RV park I got to talking to an elderly man who was very sick.  I was petting his dog and fussing over her the way I do with all animals I meet.  He asked me to take her.  He said that he needed three surgeries, one of which he was told was impossible, and that he was probably going into Hospice Care.

My mom and I discussed it.  As much as we wanted to help the guy, we're just not dog people.  I sleep late and my mom has too much trouble walking to be taking the dog out to do his business when I'm asleep.

I told him I couldn't take the dog, but I did put up a post on Craigs List for him.  If you're in the Reno/Carson City area and want a very sweet dog, please check it out:
http://reno.craigslist.org/pet/5755313367.html 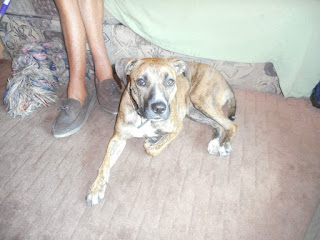 Posted by Cheap Meals for the Big Eater at 1:54 PM No comments:

There's nothing wrong with this RV park.  The staff is friendly, the spots are large enough and level, the showers and laundry are great, the price was acceptable, the location was convenient.  But after two weeks my mom and I are wishing we could leave now.  We paid for a month, and thus, shall stay for the time we paid for.

I appreciate the convenience and not having to tear down every four days to dump.  It's just that I'd rather be somewhere out by ourselves.  It's noisy here.  If we don't have the fan or AC running we hear voices, people yelling, motorcycles, dogs...

And some of the people are scuzzy here.  I heard a man say 'Shut up, bitch' to the woman sharing the RV with him.  And when I went to to take the trash out some yokels drinking beer in front of their RV beers said some insult and laughed at me.  You know...like high school bullies.

Which is really just a minor annoyance, but it's still an annoyance.  It's not like I'm going to bury my head under a pillow and cry, but it would be nice to be able to go outside without ignorant eyes on you.

Today we drove to the Carson City boondock that I would have gone to if the issue with the car hadn't devastated us so much that I insisted on 'treating' us to a month at an RV park.  The boondock looked so nice!  I really wish we had just gone straight there instead of an RV park.

The boondock was just a bunch of dirt roads and trails going through BLM land, but I really like boondocks like that.  I long for the peace of Parowan Gap, where only the odd sheep would come to harass you.
When I was planning to full-time RV I intended on boondocking all the time like RV Sue.  I wanted freedom with out RV Park expenses.  However, I started out with a travel trailer and it just wasn't practical.  The thing was a pain to tow, and hitching and unhitching was a big to-do.

So then I got this motorhome in February and suddenly had less hassle and more mobility.  It's really easy to drive this thing, easier than I thought it would be.  I can back up without jackknifing.  I never have the fear of 'getting stuck'.  And I don't need help to back into an RV space anymore.

However, once we hit the road we were always boondocking.  And it was great, for the most part.  I was able to research and put us in places where I actually wanted to be.

We had the hiccup in June and July.  I took a month in an RV park to regroup.  Now I just want to go back to boondocking.  I'm not socializing with the people at this RV park, so it's not like I'm missing any companionship by being out in boondock boonies.

We're getting itchy wheels at this RV park.  Yes, we want to get all the packages we need shipped to us, get all the laundry done, and etc.  But I am ready to GO.

That said, we will be staying in the vicinity of Reno for a while.  My mother is catching up on all her medical needs.  The big one is a painful lump in the crook of her elbow.  We aren't going to get an ultrasound until the end of August, and then will probably take many more weeks for whatever treatment she needs to resolve it.

That's fine.  There's plenty of boondocks for us to cruise around to, and we like this area.

We just have to make sure we head south before winter comes...
Posted by Cheap Meals for the Big Eater at 9:22 PM No comments: