$400 a Month Groceries and Sundries Part 2

If you're new here start with the first post to understand what I'm trying to do:

So anyway, I'm still at the commune in a rented RV space.  On Sunday my mother and I will present ourselves to the community for official membership and they will have one month to consider us, and then on May 15 they will vote on whether or not we can become members.

In the meantime I'm in stasis mode.  I've gotten a lot of work done, including a chance to write a pilot for a stop-motion animated program.  Hopefully that will pan out into new opportunities, because I really love writing for TV.

If we're accepted into the commune (and that's still a big 'if', the last two people to try didn't get in) we want to buy a 250sq ft building and make it our Tiny House.  The RV might be sold...though maybe not.  I like the option to get into it and take trips on occasion.  (I just owe so much money on it that it depresses me.)

Once we have the Tiny House I want to try aquaponics again.  I did it on my homestead in Pahrump and was actually pretty successful.  I'll also be planting fig, pomegranite, and mulberry trees.  And I'll be buying chickens, meat chickens and layers.  I can get 50 pounds of chicken feed out here for $14.  Then...maybe sheep, since hay is cheap too.  These will be the last things if I do them.  I'd love to raise red meat, and there are locals here who will help me kill and butcher.   So, fish, chicken, eggs, lamb, vegetables, fruit--I'll get well on the way of self-sufficiency!!  :D

But, until then, I'm still beholden to the grocery store.  Here it means a 30 mile drive to the nearest populous town or crossing the border to Mexico (which is 3 miles away) and having to deal with customs on the way back.  Yesterday we went the 30 miles.

I'm still trying to do the $400 budget.  Yesterday I did my final grocery shopping trip.  Here is the 2nd half of the month grocery and sundries situation.  Remember, I make the same thing for lunch as dinner for me and my mother.  For breakfast my mom has cereal with prunes and bananas with shelf-stable boxed coconut milk.  I don't eat breakfast.

Why so much broccoli?  The Dollar General in the small village where the commune is has frozen broccoli for $1 a bag.

Why so much chicken?  Every other protein is too expensive.  I can get a 10 pound bag of chicken quarters for $.87/pound.  Beef and pork are outrageous right now.  Kielbasa can still be bought for $2.50, and canned tuna is crazy cheap.  So that's what I work with.

The baked chicken - If you've ever been intimidated about baking a whole chicken on a weekday, it's easy.  Just cover it with Goya Adobo seasoning powder, leave the giblets inside, and bake for an hour at 400 degrees.  (350 if your at a lower altitude).  Dark meat for lunch.  White meat for dinner.

Chicken Stir Fry -  I've gotten a new stir fry sauce.  The yellow Sunbird stir fry seasoning packets are LOUSY.  It will make an edible meal, but it's just not that good.  So here's what I got from Walmart.com 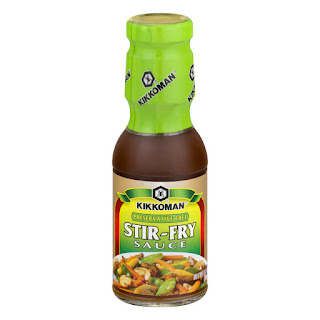 Hopefully the bottle will give me two stir frys.

For the Macoroni and Cheese I could have gotten the Kraft boxes for $1 each, but I would need two boxes to make a days worth of food, and the whole grain pasta I like is even more expensive.  By buying a big old box of whole grain shells for $1 and then getting a huge thing of powdered cheese I might do better.  Or not...the cheese was pretty expensive. 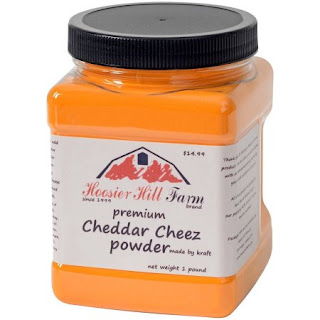 Add to the cooked macoroni and cheese three or four cans of tuna and a bag of broccoli or brussel sprouts.  Food for two for a day.

The Chicken Mofongo was wrong last time.  So, here is my new recipe.  Boil potatoes and smash them with chicken broth and Adobo seasoning.  Get a small cup worth and put in a bowl.  Add chicken broth so that you can get a soup with each bit of potatoes.  Season chicken pieces with Adobo and put on top of the potatoes.

The Chicken/Cauliflower curry is a Thai curry and was a big hit when I made it for dinner with some friends at the commune.
1 pound of chicken, cubed,
1 bag of frozen cauliflower,
1 can of coconut milk,
1 bunch fresh cilantro chopped with the stems discarded,
one table spoon diced garlic,
two table spoons curry powder,
1 cup chicken stock
1 chopped onion,
1 cup chopped carrots
salt and pepper

Cook the chicken with the garlic,  onions and chicken stock in a wok.  Add the rest of the ingredients and simmer until the carrots are soft.  To thicken the sauce dissolve two heaping table spoons of corn starch in a small amount of water and stir it in.  Add more if it doesn't thicken enough.

The Golden Curry is using these curry cubes and following the directions on the box.  Serve over rice. 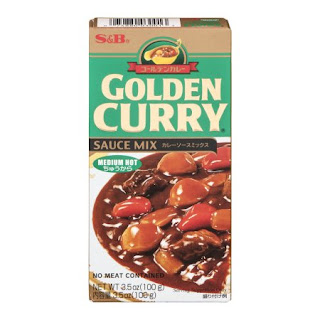 I don't know if this one is going to work out.  I read the ingredients after I bought it and it's a lot of crap I don't like.  I'll still give it a try.

So how am I doing?  Well...not as good as I'd like, but I've certainly cut down on grocery spending a lot more than I usually do.

What got me off track was my need for constant sweets.  I'm trying to fight this people, seriously.  A lot of people with serotonin deficiencies like me self-medicate with candy , since non-fruit derived sugar releases serotonin in the brain.  (Seriously, look it up.)  I crave candy at night when my serotonin dips and end up binging.  Lately I'm trying to have sweets I don't really like, such as marshmallows, so I can get my serotonin boost without wanting to keep eating the junk.

So...what have I actually spent this month, presuming I don't go shopping again?  (And I technically don't need to, but...)

EVERYTHING IS BLOOMING HERE.  OMG, my allergies are horrific!  I've had to buy 4 bottles of generic Allegra for me and my mom.  That was $44 I didn't account for.

Greek yogurt will not work as a yogurt maker culture.  I had to buy actual yogurt culture because I couldn't find any plain yogurt locally that would work.  That's $11.

Dollar General Candy and other stuff.  In the tiny village there is a grocery store the size of a 7/11 that closes at 6pm every day, and a Dollar General that stays open until 9pm.  When I get my nightly candy cravings the Dollar General is the only game in town, unless I drive 30 miles to the 24 hour Walmart.  So... I spent $91 at the Dollar General.  x_x  Though not all was candy.  They have stuff like little throw rugs and pajama pants, and when my mom comes with me she'll throw stuff like that in the basket.  So...anyway...that's the major part of my failure.

The rest was just going over budget.  But Rome wasn't built in a day!  Next month I shall do better, and shall keep to $400 for EVERYTHING!!


Posted by Cheap Meals for the Big Eater at 3:22 PM