We've been having windstorms at our boondock in Winterhaven, CA (I think that's where we are).  All our windows are closed because it's too cold and the RV is rocking enough to make me sea-sick.

We got solar installed on our new RV!  This was finished on Saturday and we haven't had to run our generator since! 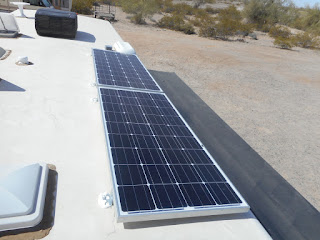 The inverters aren't ideal, but they're what were available at the store when we first started boondocking and needed a quick off-the-shelf solution, so that's what we're sticking with for now. If the 600 modified sine ends up being too much trouble I have it set up on cables that can handle a 1000 watt inverter.  I can swap it out myself by just unscrewing the leads and screwing new ones in.  We did this on purpose just in case.

The inverters both have fans that go all the time.  I'm fine with that.  We're talking very few amps and the ambient noise helps drown out background noise.

I did not get a tilt system for the panels.  I'm not going to climb up on the roof anymore.  x_x It's just too hard for me.  They're fixed in place.

We got our solar done at the 'Solar' place by the Christian Service Center on Ferguson Rd., Winterhaven CA.  I highly recommend them.  If you call the places in Yuma during winter you're probably going to have a few week wait.  These guys saw us right away.

We're staying put to wait out this wind, but it looks like tomorrow I'm going to need to dump.  Our gray tank is so small!  It's kind of annoying actually.

Anywho...we had some visitors last night and they were TOTAL JACKASSES! 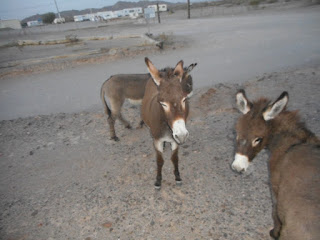 Beautiful ones!  We saw them out the window and I thought I'd throw out some romaine someone gave us for them to find it later.  The second I opened the RV door though the whole herd (of three) came over.  They obviously had no fear of humans!

Posted by Cheap Meals for the Big Eater at 12:34 PM