So, the goal today was to drive from Fallon Nevada to Tonopah in order to get us half way to Pahrump.  We're driving along, and pass Walker lake, which looked beautiful and had a lot of campgrounds (not sure if they're free or not).  There were steep dirt roads leading down to the camps I saw, though, so we kept going.

We got to Hawthorne Nevada along the 95.  I see a sign for a casino with RV parking.  I just glimpsed it, though, and couldn't pull over until we got to a McDonalds with a dirt lot across from it.


My mom and I go into the McDonalds to buy something fattening and I talk about maybe staying here for the night.  There’s a museum across from the McDonalds I’d like to check out.

Also, Hawthorne has a nicer vibe than Fallon...

While I was at the casino in Fallon there was a lounge where they had large screen TVs showing Fox News.  When Trump’s speech came on it was standing room only.  The entire casino went into the lounge to bob their heads up and down at what he said.

Now, I know you don’t read this blog for politics, but the climate in America today is one rife with political dogma.  When you hear people saying ‘ban all of this group,’ and ‘deport all of this group’ it becomes an us vs. them mentality.  And who am I?  I’m a them.  I’m Hispanic.  My mother is full-blooded Puerto Rican.  We don’t like a ‘clan’ of people nodding their heads enthusiastically when their leader is talking about doing bad stuff to the ‘them.’

Fallon, and to a lesser extent, Carson City, is a heavily white area with an aged population.  We got groceries in Fallon before leaving today and most of the other customers were single, elderly men.  I say single because men this frail would not be the ones shopping if they had a significant other to do it for them.

They were rude.  They cut off my RV when I was slowly maneuvering the parking lot.  In the store one of the men on a motorized scooter practically ran my mother over to get past her.  He didn’t say excuse me.

In the Fallon Casino restaurant two men were eating together to take advantage of the 'Two for $20' deal they have on Tuesdays.  One of the men placed a tip on the table.  They both headed out.  Moments later the second man came back and snatched the tip off the table.  As he was returning to the other man I heard him say, "Found it."  As in, he lied about needing to go back to the table for something to steal the tip.  These were men in their 60s.

The last, and most hideous event was when we had first arrived at the casino and hadn't turned our walkie-talkie's off yet.  We were picking up a conversation from two other drivers, as we often do.  One of them referred to a man walking on the sidewalk as the n-word.  And apparently all that man was doing was walking, minding his own business, and being black.

I dunno.  I like the weather and amenities in Carson City, but it’s Trump country, and that makes me and my mom feel unwelcome.  My mom likes to think she can strike up a friendly conversation with anyone without having them sneer at her for her accent.  That’s not how it was up here.

Reno was different.  People are around other ethnicities.  They’re their friends, neighbors, and coworkers, so the fear is gone.  They’re no longer a ‘them’ but part of the ‘us.’  Sadly the homogenized small town areas give off an unwelcoming vibe.

Anywho, I digress.  Our Garmin was useless in finding this magical casino that offered RV parking.  Thankfully Hawthorne is such a small town that driving through the main strip brought us to the casino.

El Capitan casino!  It has a huge dirt RV lot in back with a dump station! 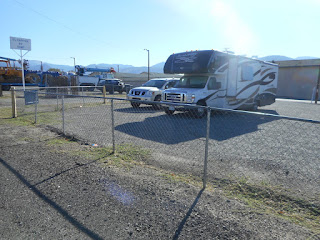 So we’ve set up for here for tonight.  @-@  We’ll finish the way to Tonopah tomorrow.  Hawthorne is a small town, but it’s more racially integrated than Fallon.  I saw multiple races at the McDonalds and everyone was talking to each other like it wasn’t anything special—because it isn’t.
Posted by Cheap Meals for the Big Eater at 5:04 PM