Usually when I say a boondock is creepy I mean that there are creepy people around or other signs that the place might not be safe.  This time I mean creepy in the traditional creepy sense...but we'll get to that later.

After a day and night of living out of water buckets we were itching to get going the next morning.  Unfortunately the wind was still making it feel like the RV was going to tip over at any moment.  I opened the curtain to my bedroom loft (the bunk above the cab) and saw my mom bundled in sweaters and coats with her winter boots on.  Yes...it got pretty dang cold.

She looked at me and said, "We are getting out of here TODAY."

I acquiesced and started climbing down to start my day.  That's when she pushed her cellphone in my face.  It was 2:15.  I kind of overslept.  D:

The reason was that I was finishing a book I've been struggling with for a few weeks and was up until the wee hours.  Leaving this late is a problem because the days are getting shorter and my mom can't drive when it's dark out.  She has vision in one eye only, and that eye has macular damage.  She's blinded by headlights and streetlights.  As you know I drive the RV and she follows me in the SUV.  We had to get to Pahrump before dark.

So we set out, and the wind wasn't quite as bad as I anticipated.  We stopped in Beatty Nevada to eat at a Dennys that was inside a casino.  See...that's a problem right there.  Daylight hours were slipping and the temptation is too great for us not to gamble for a little while after we ate.  I saw a billboard for a campground and figured we'd just pull in there for the night.  We couldn't boondock (go without hookups) another night because we had no water.

The billboard said the RV park was '2 minutes ahead'.  For people from outside the USA, that's how we estimate driving distance here.  If you ask someone how far away somewhere is an American will answer you in the amount of time it takes to drive there, not the actual distance.

Well two minutes passed and there was no sign of this RV park.  Next thing I know I'm driving into the Death Valley National Park.  x_x  Crap.  The shadows of the mountains are starting to get really long and I have no idea how we're going to make it.  I smack Garmin awake and demand for her to tell me where an RV park is.

I saw the Furnace Creek Death Valley campground and pull in.  These type of campgrounds usually don't have hook-ups, but they do usually have a dump station with potable water.  You give me that and I can camp anywhere.  I was desperate.

We ended up in a nice spot that did have full hookups.  It's a beautiful park.  These National Park or State Park campgrounds are really swanky.  We enjoyed the night of air conditioning at half-price with my mom's America the Beautiful card.

After a good night's rest we headed the rest of the way to Pahrump.  People, Death Valley is GORGEOUS.  And this is from a woman who sees beautiful mountain views on all sides.  The scenery down there, yellow cliffs, breathtakingly tall mountains with layers upon layers of smaller mountains before them...it's really worth the trip.

So we get to Pahrump and head for our old boondock here.  I know we camped in my mother's Pastor's yard last time, and we will eventually go there this time, but today I needed to do a lot of work and it can be tough with all the Pastor's grandkids.  They're great kids and I like entertaining them.  I just need to focus on work now. 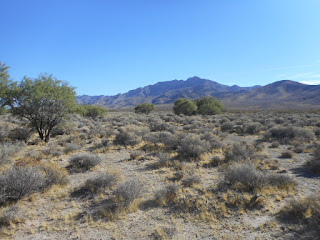 Last time we used this boondock we were 50 feet from the highway.  I didn't want to camp there this time.  On our last day in Tonopah we went out to eat and came back to find people skulking around our RV.  -_-  They bolted fast when we showed up, and nothing was taken or damaged, but it shook me up.  I want to camp where people can't see me.

I started going down the winding dirt roads of this area of BLM.  I drove for a while, and eventually found a level spot near a lot of desert trees (not juniper, thank God) that mostly block us from the Highway a mile away.  You can see us if you're coming North, but not if you're coming South. 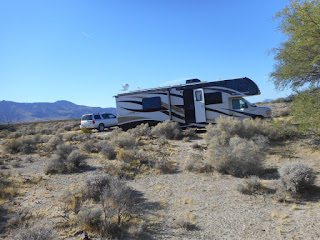 We set up the camper, got groceries, and came back.  As I'm unloading the groceries I turn around and BOOM!  A sheriff's car has pulled up.  @_@  WHAT THE HECK?!

I smile and give my friendliest "Hi!"  Because being super polite and friendly to cops always serves me well.  He says hi back and then leans into his car to speak on the radio.  I stand waiting.  After several minutes he pops his head back out and says, "Never mind.  I have a call to get to."

And then he drove away.

I wasn't too frazzled because there is a BLM sign right by us.  This is definitely a legal camp.  I think he just saw us trying to hide and wanted to make sure we weren't cooking meth.  I really don't know though.

So I do a tour of our camp area, just scouting around to see what junk humanity has left before us...and I see this. 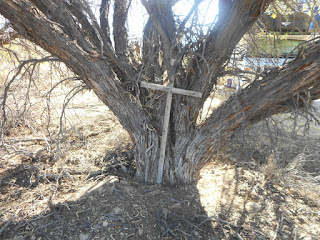 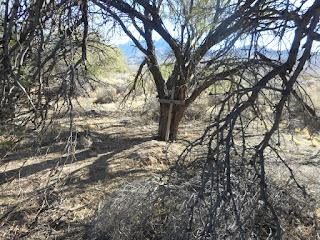 What in the fricking...THEY'RE ALL OVER THE PLACE! 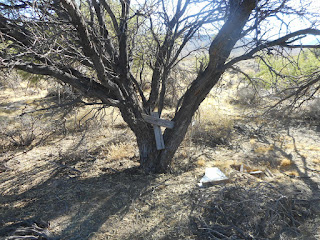 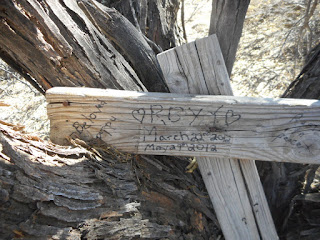 'Beloved puppy?'  Oh.  It's a pet cemetery.  One of the 'caskets' has been dug up and the lid was torn off.  Probably by a coyote. 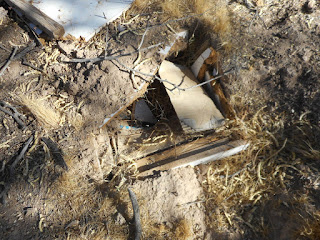 Posted by Cheap Meals for the Big Eater at 5:25 PM

Email ThisBlogThis!Share to TwitterShare to FacebookShare to Pinterest
Labels: pahrump