Learning As We Go

We are in Reno at a cramped RV park in the middle of the city.  It's not a very nice area.  However, we have no more water, electric, or ant problems, and we're in a metropolitan location loaded with amenities.  We can also get mail here, which makes life a lot easier. 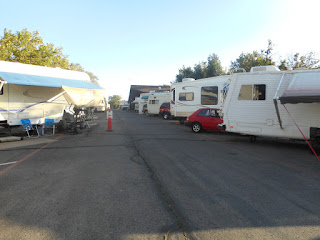 It is TIGHT TIGHT TIGHT and made tighter by people spilling into the already narrow road.  We hit that awning on the left with the cone in front of it on the way in.  I'm not going to get into that whole situation because it was very upsetting for me and my mom.  At the time of this writing the situation has been resolved, a gift bag was delivered to the poor people who's house we almost destroyed, and we feel we are back on reasonably good terms with this neighbor. 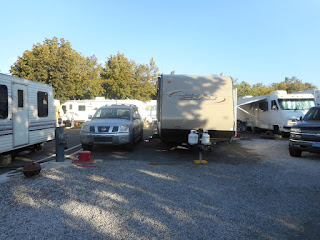 The same can't be said for some other unidentified neighbor who vandalized our satellite.

But, first things first.  Let's talk about our TV situation.  We've been full-timing since April.  When we set sail it was without satellite TV.  I felt TV was making us fat, so I wanted to go without it.  I planned to just buy a few shows now and then online.

Our tight/expensive data plan will not allow for video downloads.  I still held out and didn't get a set-up.  I figured it was going to be expensive.  As we were leaving the San Benito park to go on an outing we saw a Dish Network contractor setting someone up.  We got his info and had him set us up with a Tailgator Automatic Signal Finder Dish the next day.  This was only $325 and $50/mo in total.  Much less than the cost of a similar set up I saw online.  Yay, we had TV again, right in time for the new season of The Walking Dead!

Anyway, here we are in this inexpensive big-city RV park.  EVERYONE here is a permanent resident.  When I called I was explained that he would be kicking out someone behind on their rent to get me a spot for one month.  In hindsight this was a big red flag.

Well, here we are, safely parked.  Level.  Slide out.  All set up, and quite comfortable.  Yes, there are people hollering at each other and shifty looking people wandering around doing shifty looking things.  We really don't care much about it.  We lived in a similar place in Las Vegas for eight years.

What we *do* care about is how they were all circling our Tailgator.  Everyone in this place has the grey $75 satellites that you have to manually find a signal with.  I was warned not to get one of those if I move a lot, because set up can be a hassle.  So I always knew I was going to spring for something like a Tailgator.

But here, it's like a leaving a Mercedes Benz unlocked with the keys in the ignition.  Every creepy looking guy shuffling around at 2am was eyeballing it.  We were also getting a lot of comments from people whenever we were outside.  "Those things cost $500, huh?"

After sweating the situation our first night here I went out and got a chain and padlocks to secure it to our rig.  That wasn't going to stop a more determined thief, but at least they had to cut a chain now.  Before this anyone could have just unscrewed the cable and walked away with it.

Apparently my security measures offended someone here.  When we went out today someone had cracked an egg on it.

Seriously.  What a nasty, pointless, stupid thing to do.  But it was a wake up call.  Yes, I'd lived in scuzzy areas before without a problem, but I fit into those areas.  With a 2015 RV and this expensive satellite I no longer fit in.  We seem like rich people to this crowd of 80's and 90's RVs (and at least one from the 70s).  These are poor people living in the cheapest was possible.  Which...isn't that cheap, but is certainly cheaper than renting an apartment.  One of these people has decided that they don't like us and our having nice things they can't afford.

So, I just got down from the roof of the RV.  I cleaned off the dish and put it up there.  It's chained to the top of the ladder.  I'm too fat to be climbing up and down that ladder, but it had to be done.  Ugh.  Whatever.  I won't let this spoil our time here, but I doubt we'll ever return to Reno in the future.


Posted by Cheap Meals for the Big Eater at 6:56 PM