Almost an Accident in Louisiana 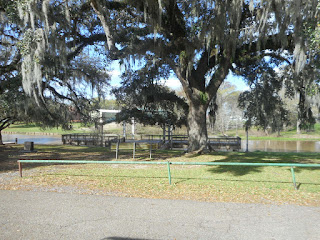 We escaped Texas and stayed one night at the Golden Nugget Casino in Lake Charles Louisiana.  Their web site says you can park RVs overnight on the week days so long as you're out by 6pm on Friday.  We went into the casino to see about getting a permit.  We were told we didn't need one, but to be out by 6pm.

Friday morning a sign was put on our door to be out of the lot by noon.  -_-  Furthermore, the security Cadillac Escalade sat beside us with its lights flashing starting at 11pm.  Yeah.  We got it.  We're going.  Buttholes.

This is one of those places owned by Tilman Fartito (misspelling deliberate) who has that show Billionaire Buyer.  He has slot machines with his cat-who-ate-the-canary face on the reels and ads for his TV show on all the reward screens on the machines.  We thought it was cute, since we watch the show.  But then I tried to get money from an ATM and it asked for a $6 ATM fee.  He became billionaire by gouging every last penny he could out of people.  I went back to the RV and saved my money.

Traffic in Louisiana is determined to give me a nervous breakdown.  It was bumper to bumper on Highway 10 the whole 100 miles to our next stop.  I was clenching the steering wheel so tight my fingers kept going numb.  But it gets worse...

As we started our trip a white SUV peeled left off the highway down into a grass slope.  At first I thought it was a service vehicle, but then it tore back onto the highway at full speed and started fishtailing and hitting the metal barrier.  Me and the dense traffic around it had all slowed down the second we saw it fly off the road, but once it started going out of control back in the two lane highway we all stopped.  A big rig stopped in front of me too short for me to have time to stop.  Thankfully I was able to get into the breakdown lane next to it.  I stayed cool.  My mom stayed cool.  We all waited for this maniac to get control of her vehicle before taking someone out.  She did, and continued to speed away with parts falling off the back and bottom of her car.

Ohhhh God.  That was so close.  I was giving prayers of thanks that I didn't rear-end that truck the rest of the trip.   The only casualty was our trashcan, which tipped over in the mayhem.  That horrible driver should be picking my trash up for me.  >:(

My mom got on the walkie-talkie saying, "We are going to New Orleans and we're going to have a great time," to diffuse the bad karma of our near accident.  I was clenching the steering wheel too hard to answer.  Thankfully my mother is as careful a driver as I am and did not have to slam on the brakes to keep from rear-ending me.  I looked back and saw her calmly waiting for the wild SUV to either flip or get back under control.  I had an extra gray hair when we stopped.

In the Southwest it's easy-peasy with low traffic and wide roads.  We're getting deep into the east, where populations are high.  I'm so glad we're not going all the way to Florida.

I want to return to New Mexico and move into that Intentional Community.  I want the RV to become a stationary house.  I never want to drive it east again.

Anywho, we eventually got to Breaux Bridge park and found a narrow slab to park on.  Hopefully we'll be okay, because it doesn't look like a legal camp despite what others report. 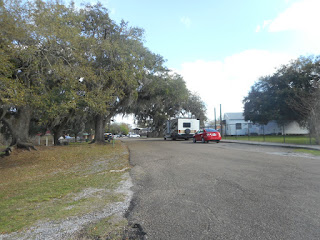 It's beautiful, with huge trees covered in Spanish moss and large water fowl jonesing for my loaf of bread. 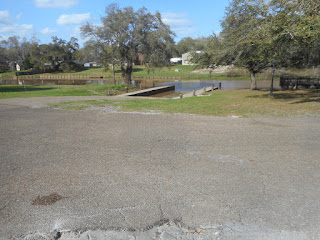 We had the annoyance of a crowd of cars surrounding us when the Catholic school got out, but otherwise it's looking peaceful.  Hopefully we can stay the weekend without another official deciding to kick us out.
Posted by Cheap Meals for the Big Eater at 1:53 PM