A few days ago we noticed a pile of tires on the road leading to Iron Bridge Park, where we were camping by the 'lake'.  (Apparently part of Belton Lake).  We paid it little notice as we continued out to get some 'General Delivery' at the nearest post office.

On the way back there was a sheriff and two road worker trucks surrounding the pile of tires.  Illegal dumping--and the authorities were livid.  I've never actually seen this anywhere else in our travels, other than the odd litter.  Here in Texas, the most policed state in the union, it happens.

The sheriff and the road workers descended on the park, patrolling and hauling tires.  I finally flagged one down and asked him to put a barricade to block people from driving into the mud where I got stuck.

"Oh, we won't be needing to do that.  We're closing the whole park."

I was shocked since the park swarms with fishers and people bringing their kids to play.  I asked him why, assuming it was flooding.

"People be selling drugs here.  Y'all ain't camping here tonight are you?  I wouldn't if I were you.  You're liable to get shot."

I withheld telling him we'd been there 8 days already without a problem since I don't know what the legal camping limit is.  Yes, we'd seen some late night meetings outside the window of the RV where stuff was exchanged.  I didn't really care so long as they left us alone, and they did.  I'm not worried about the drug dealers breaking in, because they don't need the money.  The drug addicts are another story, but so far so good.  I would think there were easier targets than my RV, especially with the tent campers nearby watching us.  (We befriended the man in the largest tent by giving his car a jump start.)

That being said, there was no need to tempt fate.  We planned on leaving soon, but I told the guy the park was perfectly safe during the day and it was terrible to take it away from all the people who enjoyed it.

"Naw, we can't be having people selling drugs here at night."

Why not?  Who cares what happens at 1am when the park is empty?  The boat ramp is in constant use.  Children are playing here during the weekends.  The banks are loaded with people fishing.  People in beat up cars need the abundant fish here to eat.  What else is there for them to do in this podunk town?  There's NOTHING here.  You're going to take away everyone's good clean fun due to the late night drug dealing?  GROW UP.  This is America.  Drugs are everywhere.  You know what keeps people off drugs?  FISHING.  Ugh...whatever.

Two days later we planned to leave but had to pick up a package that hadn't yet arrived for my mother.  We tried to drive the direct route 8 miles into the nearest town, but the road was barricaded due to flooding.  A woman pulling her toddlers on a wagon came by and told us to just drive around the barricade.  The flooding had already gone down.

Great!  On we went, until we got to the FLOOD.  The road had turned into a lake!  Are you kidding me?!  We turned around.  For the next few hours I struggled to use my Garmin as a map to find a different route.  We used half a tank of gas to finally make it there.

The medical supply store had sent my mom's package FedEx.  -_-  This is after I personally told them on the phone, over and over, it must be sent through the US postal service.  They assured me they would send it express mail.  They lied.

However, my mother with her usual bubbly personality, had sparked up a conversation with the post office employee the last time we were there.  She mentioned she was waiting for her blood testing supplies.  So, when the FedEx came that day the woman broke the rules and accepted it.  Because she knew my mother needed it badly.  This is a good lesson to me that it pays not to be bitchy all the time.

The water was rising and we were losing daylight.  We headed out of Iron Bridge Park to continue towards our destination.  The reason I'd actually swung upwards that way was so we could visit the area I grew up in as a child.  We never did.  And I guess we don't regret it.

Now we're heading south, between Austin and San Antonio, trying to avoid having to drive the RV in either big cities.  It's bad enough driving through cities, but in Texas the legal limit is often 80 miles per hour.  Speeds I can't dare approach in my home on wheels making people wildly pass me with only inches to spare in the dense traffic.  x_x  Two lane roads that would be 45 miles per hour any where else are 75 here.  It's insane.  I loved it when I was a speed demon eager to get from A to B, but I'm driving a house now!

We went to an RV park in College Station Texas.  Passport America.  We just needed to dump, take water, get rid of trash, shower, and do laundry.  But there's a leak in the back window of the RV that lets in rain water.  -_-  So my mom's pile of blankets and a coat got soaked.  This leak is really troubling us.  We're worried about mold growing inside the wall of the RV.  There's just nothing we can do about it now.  We can't get stuck somewhere waiting out a long repair.  I've put caulk on it for now, but I don't know what I can do about the water going between the walls.  Ugh.

Anyway, the laundry situation amped up to something extreme so we stayed two nights and did laundry in town...which I hate, but it had to be done.  While in the RV park I was reminded of why we hate them.  This place was so obnoxiously noisy, day and night, with what sounded like drag racing going on in the road beside us.  I looked and it was just one white truck who loved to rev his big engine.  -_-  On top of that there was a bus stop right beside us.  It amazes me how loud and perky children can be at the ass crack of dawn.

One good thing was the pig in the pen of the RV next to us.  (Welcome to Texas, ladies and gentlemen.)  He was so cute and friendly!  The snorts!  My God...the snorts.

We left there yesterday with our errands done.  It was a short drive to the next boondock, which was good since it was raining.  I was going to the Sam Houston Equestrian Park...which is actually just a turnout in the Sam Houston national forest.  I don't know if people on horses are usually here, but they aren't now because the trails are closed due to the rain. 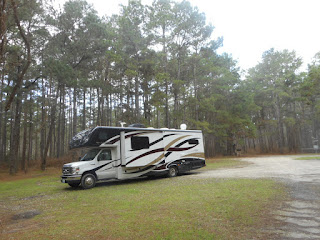 I'd say we're more than officially out of the desert now.  I haven't seen any scrub brush for weeks!  People think of Texas as desert, but it gets green and humid as you head east. 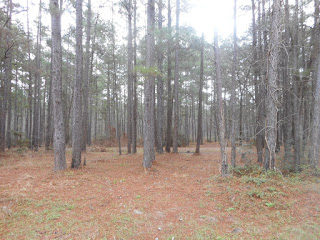 We were worried about pulling in here since it's dirt and it was raining, but I took the chance.  I avoided the scary puddles and neither vehicle has gotten stuck.

For the first time in a National Park or Forest, I saw a big pile of garbage.  -_-  I guess illegal dumping is the norm here.  The ranger drove by shortly after we arrived, and I hope he didn't think we had anything to do with it.  This is such a beautiful forest.  What's wrong with people? 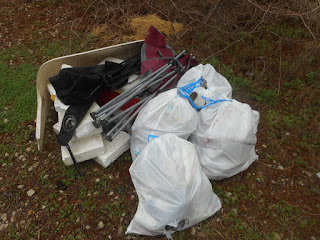 There is also a tent that does not seem to have people in it.  I went by pretty close a few times to retrieve my cat.  (Sultan continues to manage to allude death.)  It's packed with stuff and the owners are no where to be found. 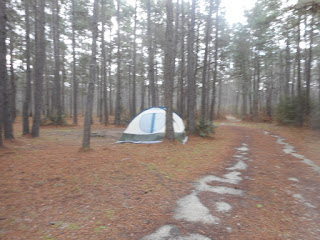 Well, that's fine.  We're enjoying the solitude.  We'll stay here until our next dump, and then head to Louisiana.

Posted by Cheap Meals for the Big Eater at 8:48 AM