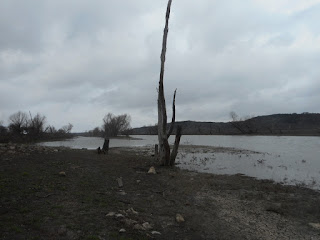 I always wanted to camp near a beautiful lake or river with the RV.  When I found this place I pulled next to the water and my mom piped up on the walkie talkie:  "We're too close to the water!  Move to the other side!"

Sometimes I forget that she lost her father and brother in a flood in Puerto Rico.

Her fears are valid here.  There was a big flood last June that decimated the area, and there are still areas full of water.  We went over a bridge where there was a pile of torn up trees. 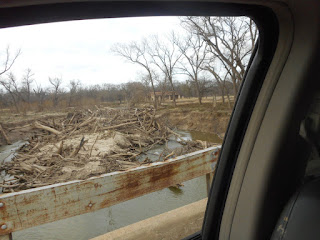 My plan was to stay here a while and dump/shower at Mother Neff State park.  I checked out state park and was told there was no dump station, despite the listing and map on the counter showing one.  When I asked about it the nice ranger said there *was* a dump station, but it's still under water.

So if we want to dump we have to rent camp site and it would be $28 all in.  Ugh.  If we want to stay here more than one dump cycle I'll have to figure something out. 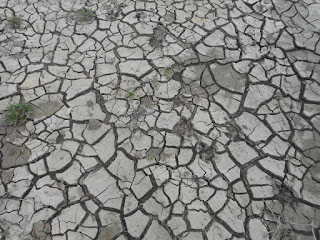 I do want to stay for a while because we still have a month to make it to New Orleans and I'm running out of camping and gas money fast.  If we keep up the pace we're going I'll have to dip into savings.  Also, once we get to New Orleans even free park camping will be scarce.  I would have to pay for an RV park.  It's not in the budget. 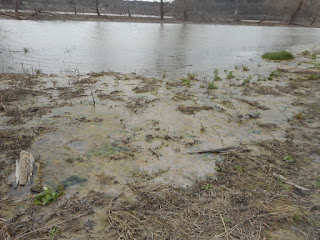 Other than the flood danger, which we're being vigilant about, this is a perfect boondock for me.  Free.  No signs about limits or permits (there's a tent colony that looks like it's been here a while).  And Internet!!!  Yay!

I like this area and the peace and serenity of it.  There are enough people around to make me feel 'safe' though I'm not sure about the inhabitants of the tent colony right next to us.  I wave and make nice and have not had any problems.  This is a good camping situation for the homeless (if that's what they are) because they have a pit toilet, plenty of fire wood, fish, and a water source.  I was homeless for a harrowing year growing up.  No judgement.

Now is my time to finish that book!  Then I might splurge on a fishing license, because I've seen them jumping!
Posted by Cheap Meals for the Big Eater at 11:22 AM