This may be my only post until I get back to the continent, because Verizon doesn't work here.  x_x  We're using the hotel wi-fi, but we only have one night at the hotel.  Our flight came in late so we stayed at a hotel in San Juan rather than drive an hour right when we got here.

I got the cheapest hotel I could find, which in the USA just makes sense, but in Puerto Rico put us in a dodgey area.  Fortunately there's a locked metal grate protecting the rooms and an armed security guard.  I did have to park on the sidewalk though, which was kinda weird. 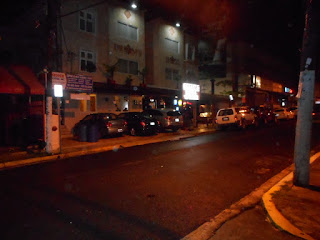 This is the actual hotel, and our rental car is that silver SUV the third one in.  The people here are super nice.  I had to go out by myself to get bottled water and my broken Spanish was smiled at.  Do we smile at people with broken English in the USA?  No.  But here, it's cute for a gringa to try to speak the language.

Let me start at the beginning.  Getting the flight in New Orleans was a breeze.  It's a nice airport and it was only an hour and a half flight to get to Fort Lauderdale Florida, our first leg of the journey.  Once in Fort Lauderdale things rapidly fell apart.

My ticket said gate B1...or so I thought.  It actually was FLIGHT B1.  Who names flights like this?!  I thought it was the gate.  And so I had to get on a bus and go to a different terminal.  My mom and I are really fat now, so we bought three seats just to save us some heartache.  This means we had extra carryons.  Great to bring everything we'd need for six days, but horrible for me to lug around.  The saving grace was my mom's walker which could be loaded up with the bags.  However, I can't put a walker full of bags on and off a bus.

Well, on top of that a Cuban woman comes beside us with a baby in a stroller and a gigantic pile of bags on a Smartcarte.  So I got my mom on the bus and unloaded all our bags, got the walker on, got the woman with the baby on, and then got all her bags on.

We arrive at terminal 3 (which was not the terminal I needed to be at, mind you, I had it right the first time, but whatever).  I help unload my mom and the woman, but now she doesn't have a smartcarte.  So I stand watch over her bags while she gets one, and then I push the smartcarte and she pushes the stroller.

We are helping her check in her bags and she's overweight...her bag was TITANIC.  It's $125.  The woman's only card is declined.  I'm going to omit what I did next, because I don't want people to think I'm the type of person who would pay $125 for a stranger to get her bag on the plane...but let's just say someone paid for her bag.  And it was me.

Then the woman collapses, because it turns out she had just come from Cuba to have her gallbladder removed.  Apparently Cuba allows it's people to go back and forth now if they're permanent residents.  We get her a wheel chair and I take her stroller and luggage and take it to her gate.  I try to get through security and am told to go F myself, because I'm supposed to be at gate F in Terminal 1, the terminal I'd first landed in.  So with that, I hand her off to the airport staff.  There's nothing more I can do.

People who aren't much for religion might say that I screwed up and it was lucky for that woman.  I believe that sometimes God makes me screw up because He uses me to help other people who would really be screwed without help.  It happened before with the people stuck in the mud, and a few other times.  So I look back at my stupid mistake and can take satisfaction in thinking, God wanted me to read my ticket wrong so I would be there to help this poor woman.

Now I have  to take my mom and all our luggage back to the correct Terminal and gate.  So we're waiting at the gate on the ticket, and noticing that no plane boarding is happening.  Two people go up to the staff and ask if they're going to board for Puerto Rico.  "Oh, that gate changed to F3.  You better hurry, they're about to take off."

We get to the car rental lot in the airport parking lot and are given this tiny car that pinches our fat bodies and is hard to get in and out of.  My mom and I are smashed together.  I'm like...no.  Screw it.  I'd rather take taxis.  I go back asking for my money back and get upgraded to a big ole SUV for free.  @-@  Nice!

I like driving in PR, it gives me freedom and control.  But man is this rental car expensive.

Posted by Cheap Meals for the Big Eater at 8:29 PM