I'm back now, but am posting all the posts I wrote down while I was there because I didn't have an Internet connection to post them at the time.

The coquis are louder than you think people…those little frogs have huge lungs.

I experienced a tale of two aunts today.  I started in paradise and ended in a gut punch to the stomach.  For those who don’t know I have two full aunts in Puerto Rico who share the same mother and father as my mother.  One of these is middle class and one lives in poverty with her daughter.

First, the well-off aunt.  Have you ever had to deal with the problem of too many bananas growing in your back yard?  So much so that you push over one of the trees with loose roots hoping to kill it, but the ground is so fertile that it reroots and starts growing bananas again?

My aunt has 13 wild banana trees growing in her acre back yard.  Also papaya, coconut palm, breadfruit, some kind of almond, yautia (a widely eaten tuber), wild ginger, yucca (another popular tuber, also called cassava), ñames (yet another widely eaten tuber related to the yam), and guanaba (a green tree fruit the size of a soccer ball that I ADORE, which also cured my ulcerative colitis symptoms last time I visited).  Most of this was never planted, so it’s all clumped together on the edges of her land.  The wide open space between them is what she calls her yard. 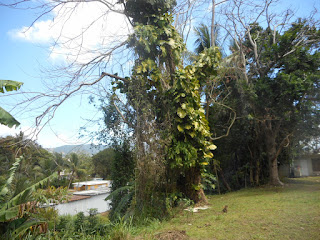 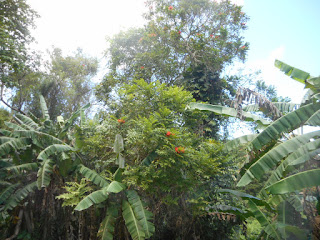 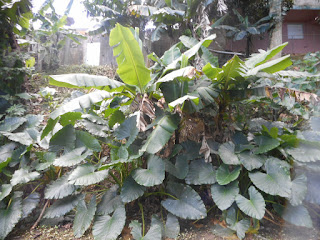 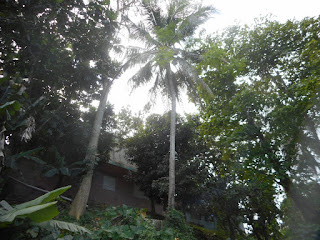 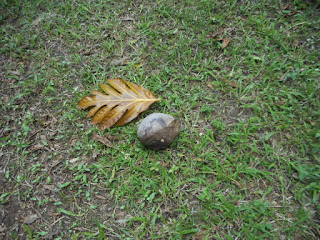 Last time I was here twelve years ago my aunt would dig dinner from the yard and just add some salt cod.  This time she has an extra freezer full of the same kind of chicken and pork I buy.  I don’t know what happened, but her financial situation improved.  They have a 2009 car that looks new and a house that is new, since the house they had last time was destroyed by termites.  They watch TV on a large flatscreen and I noticed the remote was from Dish network.

My aunt and her husband are normal Puerto Rican middle class (which is most of the island inhabitants).  Not rich, but far from poor.  I’m extremely comfortable in one of the two spare bedrooms.  (She used to care for my uncle before he died and cousin before she moved out).

Her back yard makes me salivate.  I could harvest so much.  I could live so well off this fertile volcanic soil.  (But there are bugs that chewed up me and my mom as we walked through.  Hopefully we don’t catch Zika.) 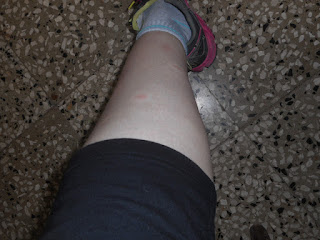 I looked forward to this paradise and it did not disappoint.  In fact it was better than last time because she’s not living in a falling apart shack, but a sweet new concrete house.

We went from this paradise to a situation that makes tears build up behind my eyes.  My poor aunt and cousin live in public housing.  That’s not terrible in and of itself.  The last time we visited she lived in a much worse project with no working toilets.  Just a ditch.

What made me sad was the state of my aunt and cousin.  My aunt, who is younger than my mother, has lost all her teeth and looks 80 years old.  Her hand has deformed, bent backwards in the middle.

My mom and I looked at each other while holding back tears.  The hand was something done to her by her daughter who was murdered ten years ago.  She refused to have surgery to fix it back then, and we had to leave it alone.

The teeth, however…why does my 65 year old aunt not have teeth?  Yamila says she’s saving her money to get her teeth fixed, but she has no money to save.  When we inquired about just paying for her dentures we learned that the dentist she'd been making payments to had run off with the money and had to be found by the police.  The current situation is unknown.

We feel that the visit was rushed, because my aunt Yamila was also made uncomfortable with us seeing them like that.

The other half of the ‘them’ is my cousin…my sweet cousin.  Last time I saw her 12 years ago she was a feisty skinny thing who called me fat and claimed that she was single because she had too many admirers to choose from.  It was believable enough.  She was beautiful.  She’s still beautiful, but visibly suffering.

My cousin is on medication that makes her skin ash white and causes her brown spots when she gets sun exposure.  She’s also swollen, like I was when I was on prednisone (steroids for my ulcerative colitis) but she’s not on prednisone.  She talked with a slur and if I didn’t know her from before I would have thought she had downs syndrome.

She handed my mom the four bottle of pills the government services has her on and asked her to tell her what was making her so sick.  We wrote down the names to look up later.

We gave them money.  That’s all we can do for now.  I don’t feel it’s enough.  I feel like I’ve abandoned my own family.  I’m always helping strangers, but I don’t help my own flesh and blood.  I have to look into doing better for them. 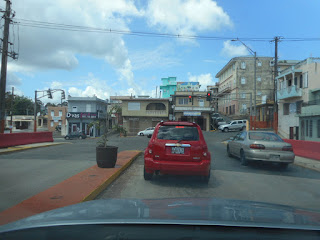 Anyway, I want to get in some pictures of the Puerto Rican street scenes.  It's so CROWDED.  And not just in San Juan.  We were out in the 'country' but there is no country except what's in people's back yards.  Puerto Rico has a huge population in a small area.  Even the steepest hills get houses crammed all over them. 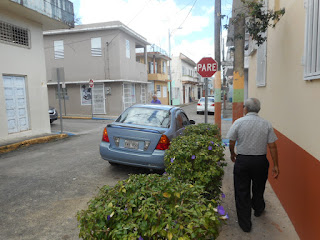 The first day I got there my 'uncle' (aunt's husband) took me with him to the betting parlor to bet on the horse races.  It was in this dense neighborhood. 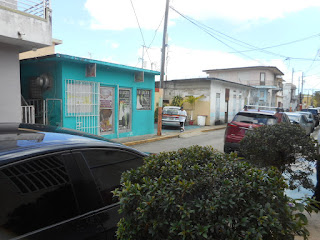 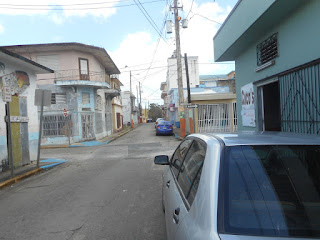 Okay, so day two is done and time to go to bed.  First I had to deal with the peeping tom in my window... 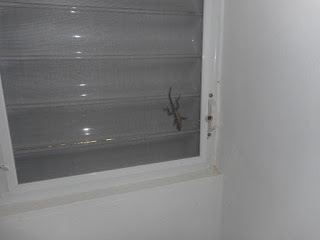 Posted by Cheap Meals for the Big Eater at 3:49 PM