I know I haven't posted in 5ever.  I've been very busy with getting out new fiction.  First the sci-fi romance Aliens Bride, but then also a short gay sci-fi romance (adults only) because I had a big hole to dig myself out of.


Now that sales are high again I have a little breathing room!


We're still at the Thousand Trails Campground in Acton California.  My mom is having a health issue that will require us to stay here for a month or two.  Now, as I've said before, our Thousand Trails membership is 14 days in, 7 days out.  Meaning every two weeks we camp here we need to leave for 7 days.

Instead of leaving I've been using the free ReadyCampGo membership I got with my Thousand Trails membership to buy our 'out days' at $20/day.  I did this for our 7 days out after Palm Springs.  On June 5 I'm going to try to do it again.  I've booked 7 days with ReadyCampGo and I will hopefully just stay here and check-out/check-in at the front like I did before.  This will be the easiest way for us to hang around.

Now, I was not opposed to boondocking on our out days.


However it doesn't seem as though there's any legal boondocks where we can fit our rig around here.  If we have to tow the RV a two hour drive somewhere and back then we'll be paying in gas what we would spend to buy our out days anyway, with a lot more hassle and a lot less amenities than we'd have if we just stayed put.

Today I was hoping to find a boondock in the nearby BLM areas.  I mean, if there's a place within 30 minutes of here, at a higher elevation (so I don't need A/C to be comfortable) then it's worth the hassle of moving and dry camping to save $140.

My mom and I went down Soledad Canyon Road to investigate.  We passed the KOA to an Angeles Forest entrance type place up a hill.  I drove up said hill hoping there would be a passable road to a higher level area where I could boondock.  My California Adventure Pass was good for this forest, after all.

Okay, so when we drive up this area the dirt road leading up higher is closed off.  :(  Oh well.  I park to go and read the sign and see if we could just boondock in the parking lot there.  :p  Wishful thinking, but I don't know jack about boondocking--so maybe?

Out of the mountain trail comes a young woman walking with hiking sticks with a big pack on her back.  There's dirt crusted on her legs and she's so sunburned that I'm not sure if she's 20 or 40 at first.  I say hi to her as I approach the signage.


Now I realize that this is a young woman who has come from some place far away.  She wasn't a day hiker who was parked somewhere.  There was no other vehicles.  This was a perpetual hiker.  She looked exhausted.

I told her to get in our SUV to drive her to the KOA.  She said she couldn't possibly because she was too dirty.  Meh.  Who cares.  Get in.  We throw her pack in the trunk and drive her down.

She says she's hiking from Mexico to Canada.  @_@ WHAT?!  Apparently there are others doing this since she recognizes a group from the clusters of tents at the campground.  I was so amazed at the adventure this woman was on.  I wanted to spend hours hearing of her journey.  The woman was obviously beat and eager to crash, so I didn't attempt to delay her.  We dropped her at the campground and continued on our way.

We drove around many a road looking for the elusive legal big-rig boondock.  Meh.  Nothing.  So we headed back.

As we're driving back two guys are in front of the KOA kind of blocking the road to flag down a car.

Now, ordinarily I would attempt to ram them while honking my horn and putting the pedal to the metal.


Ordinarily when you see guys doing this is a car-jacking.  Sorry--I'm from Vegas.  It happens.

But this isn't Vegas.  And though we are 30 minutes from LA, this isn't LA either.  They were in front of the KOA and looked like hikers like that girl.  I decided to stop and hear their plea.  I kept the door locked and only opened the window a crack.  They asked for a ride to the store in town.

We'd come upon two beddraggled hikers who were in their very early 20s.  They looked like realangos, which is Spanish for stray dogs, but a realango tends to be a very skinny scraggly stray dog.  We felt the two realangos harmless and let them in the SUV. 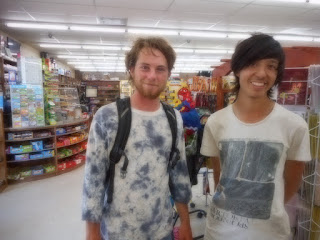 The Caucasian realango was Matt and the miscellaneously Asian realango was Assi.  We eagerly soaked up information about what these crazy hikers were doing.  Apparently the Pacific Crest Trail is a crazy program where hikers hike from Mexico to Canada.  They all go to the same stops and are more or less in a big staggered group.  Neato!

The grapenuts told us of their life philosophies (typical hippy stuff) and gave off incredibly good vibes.  We took them to the nice market in town I covered in the last post.  My mom HAD to feed them.  I mean, I live to feed wild animals and my mom likes to feed the human kind.  So she bought them each a piping hot sausage roll from the deli counter.  We waited for them to get their tortillas, granola, coconut waters, instant Lipton noodle type camp meals, almond butter, poptarts, nuts, peanuts, and shitloads of beer!!  The took advantage of the fact they had a ride back to the campground to load up.

It was a lot of fun helping these tired kids.  I know they're not homeless or necessarily poor, but they were definitely tired and hungry and it was great to get them to and from the store.

Ahh, if I were younger and healthy I would totally...never fucking do anything like that.  But I wish I could be the type who would live life so hardcore and go for ultimate experiences like that.  I can honestly say the dehydration issues with my lack of intestines and my screwed up knee from the bone cancer precludes me from doing such a thing now.

I can, however, do the closest thing possible for me to do to what they're doing:  Full-time RV!

Hooray!  I get the adventure of traveling the country with less snakes and foot blisters.  :D

Posted by Cheap Meals for the Big Eater at 7:56 PM