Solar for our 31' Trailer With Costs

Today the guy from Four Seasons RV (in Pahrump, NV) worked all day getting my solar set-up installed.  Unfortunately it started raining hardcore at 4pm, so he had to quit early.  My RV is parked in a place that turns into sludge when it rains.  He just couldn't keep going, but he will finish tomorrow.

I had most of the materials, but he had to provide additional cable, connectors, and screws to mount stuff.


Here's a cost break down of the entire price of my solar set-up.  I AM CHEAP, and I think I did well.  I've linked to anything I bought through Amazon.  Everything else was from the W store.  I added shipping costs to the price for anything that I didn't get through Amazon Prime

(which you should totally sign up for using my affiliate link right there).


I get worried when I see how much more other people paid for a lot of stuff.  I think some RVers are using solar electricity businesses or RV Superstore places to get and install stuff.  I did it the cheapie way I do everything.  Hopefully it doesn't bite me in the butt.  The guy who was doing the installation approved everything I bought, so fingers crossed!

He had to use a spindle's worth of additional cable ($75, included in his labor price) and put copper connectors on the batteries.  (The black and red cable spindles are behind the ladder there). 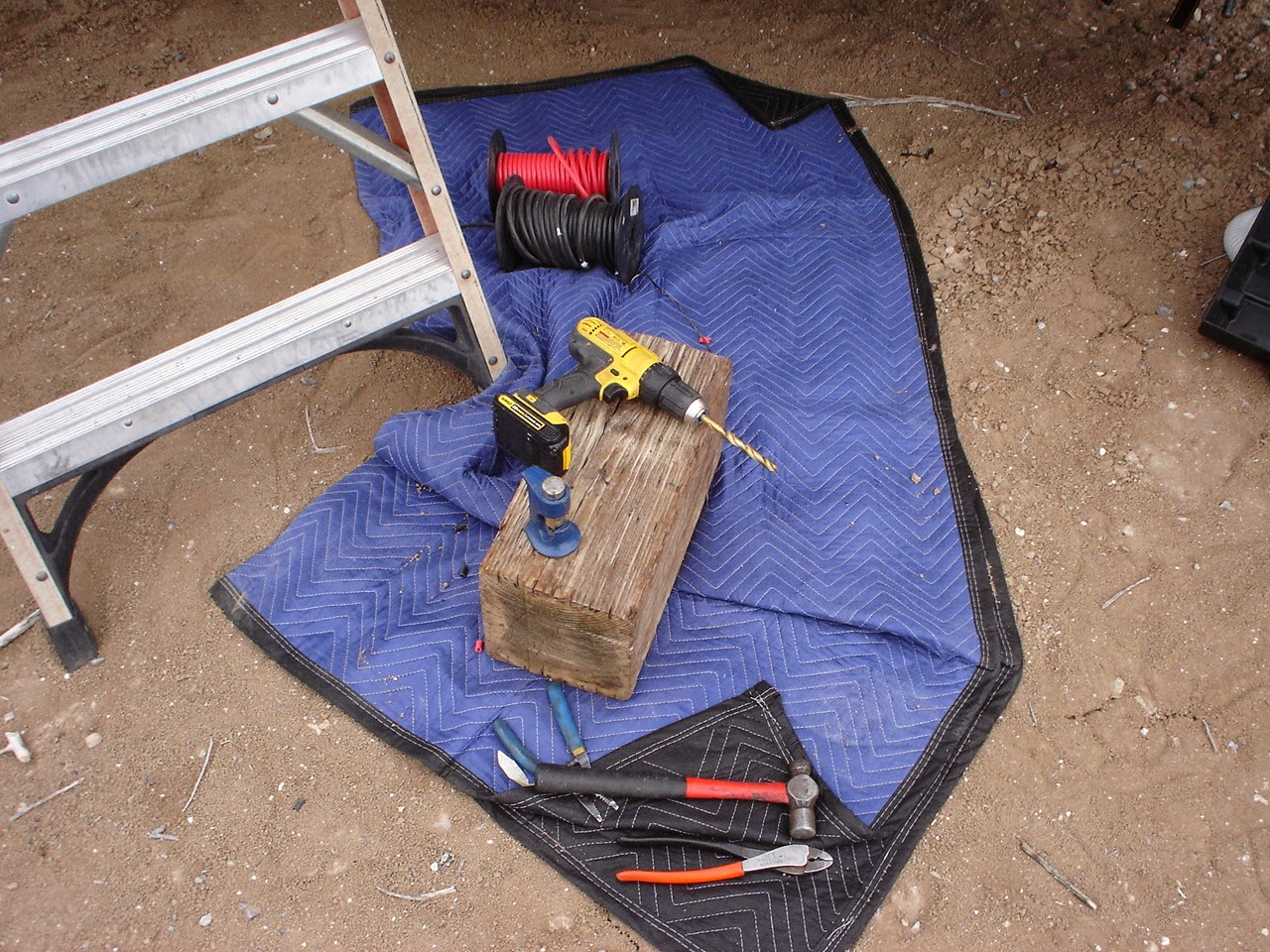 He recommended I get 31DC batteries but the W store only went up to 29DC.  He said that was fine.


Those copper connecters at the end of the red and black cables were provided by the guy I hired.  I have a FOUR battery bank.  These three are also connected to the house battery which lives outside the RV on the hitch.  They are all 12 Volt. 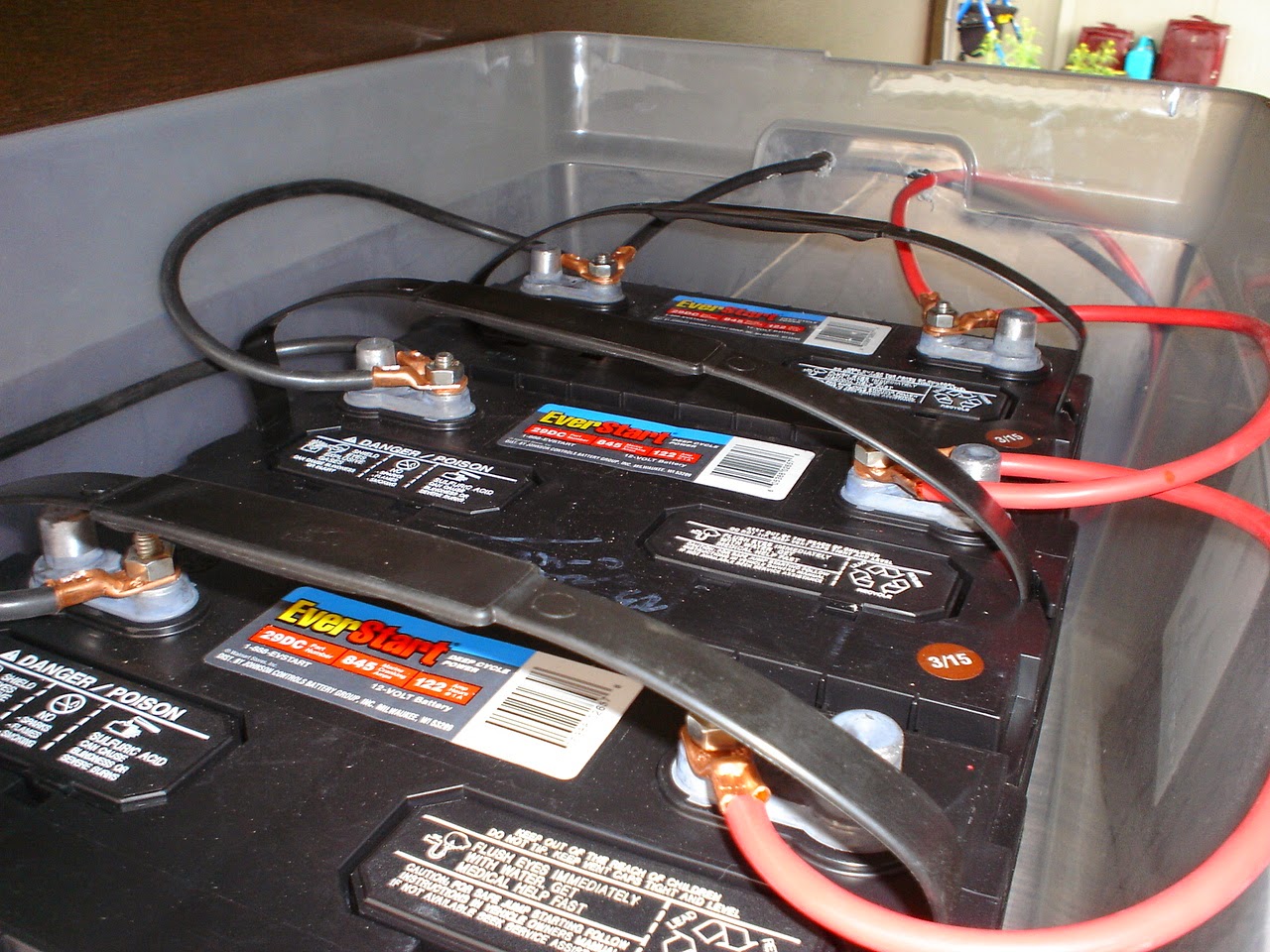 The batteries will live in the RV basement.   He didn't vent the tub yet, but it's necessary to vent the battery fumes to the outside.  He will be drilling a hole in the tub, putting my hose in it, and putting the vent end of the house through another hole drilled to the outside.  This will keep the inside of the RV from getting damaged by battery acid fumes. 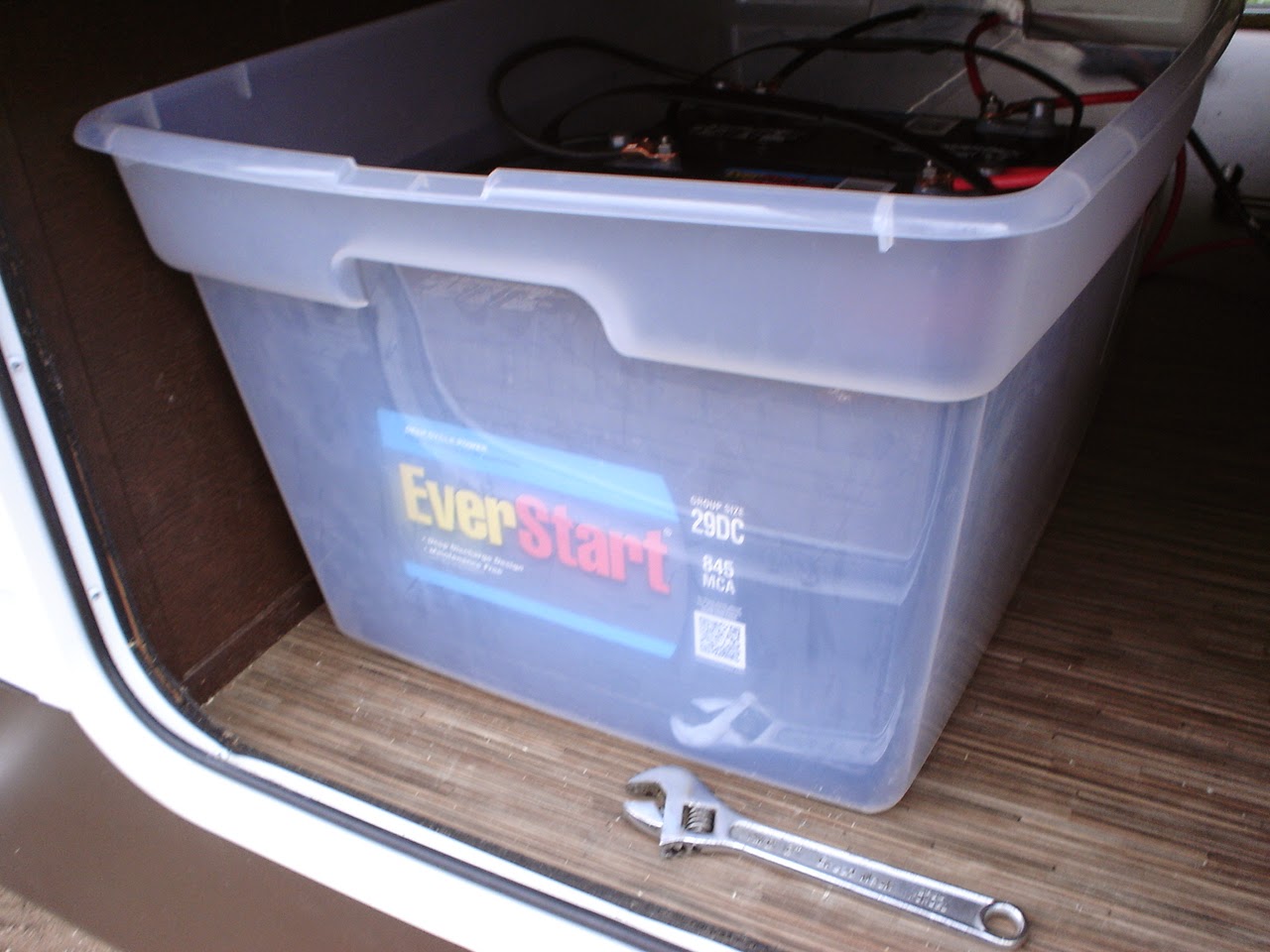 By using stick-on solar panels I avoided causing any damage to the roof.


These were cheap and easy.  Reviews said that they stay on forever...but my guy seemed a little dubious.  He said he could peel them off to reposition them.  I'm concerned.  I may have to consider a roof-safe adhesive (he said there was one product safe for rubber roofs, Dicor or something). 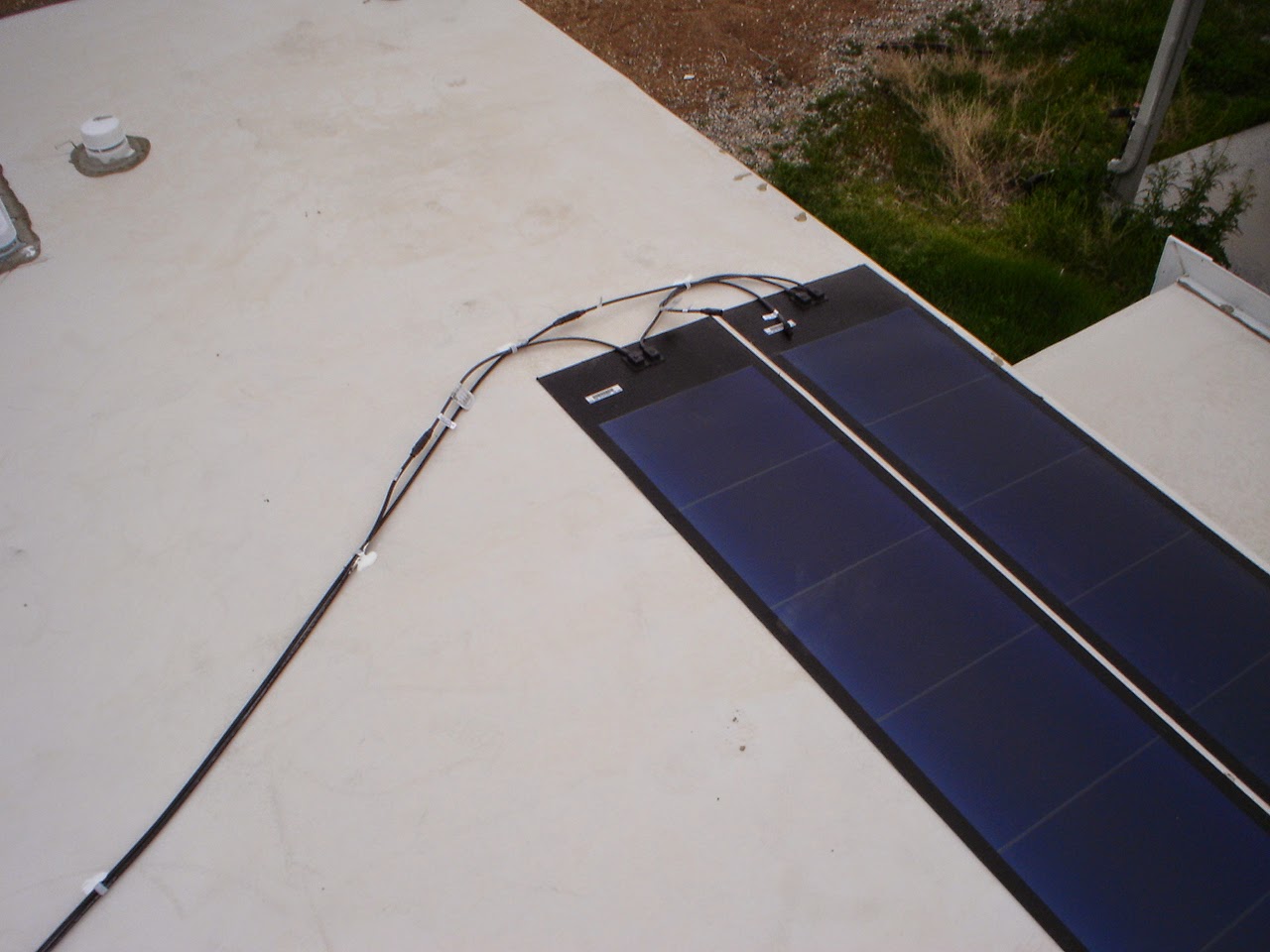 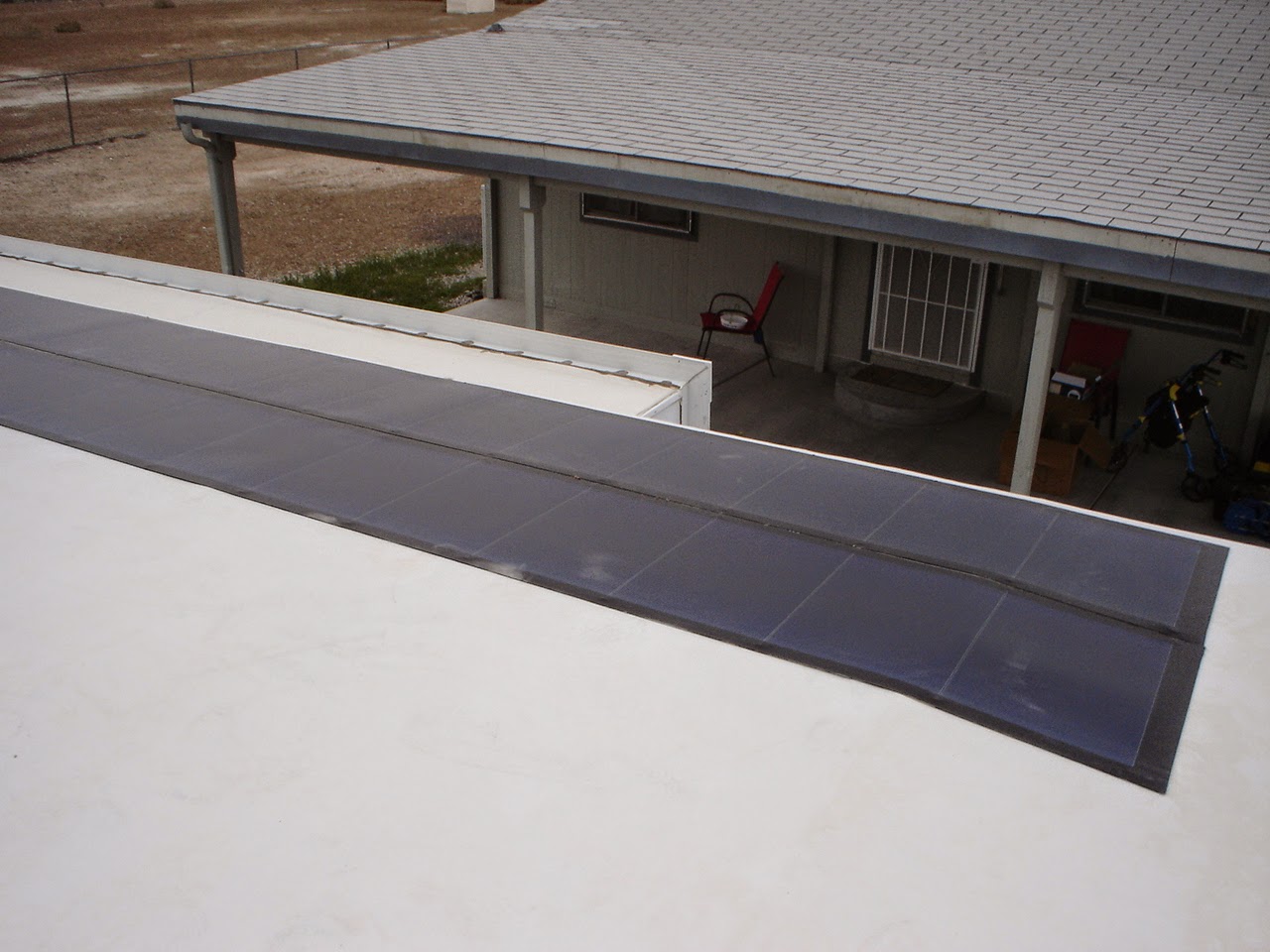 Pictured below is my inverter.  As I said in the previous post, the only way we can use AC power (for stuff you plug in) is with an inverter.  The outlets in the RV will not work while we're dry camping.  Only DC power stuff, like the lights, will work without an inverter.

To use our laptops, TV, and wifi hotspot we're going to need to plug the stuff directly into the inverter.


The inverter will live in our RV basement, but a power strip will be fed up into my mother's RV bedroom area inside.  Everything we need to plug in while dry camping will have to be off that power strip.  We'll be bringing extension cords!

Our inverter came with a remote control which will be mounted inside my mother's bedroom also.  This way we can turn it off and on without having to go into the RV basement. 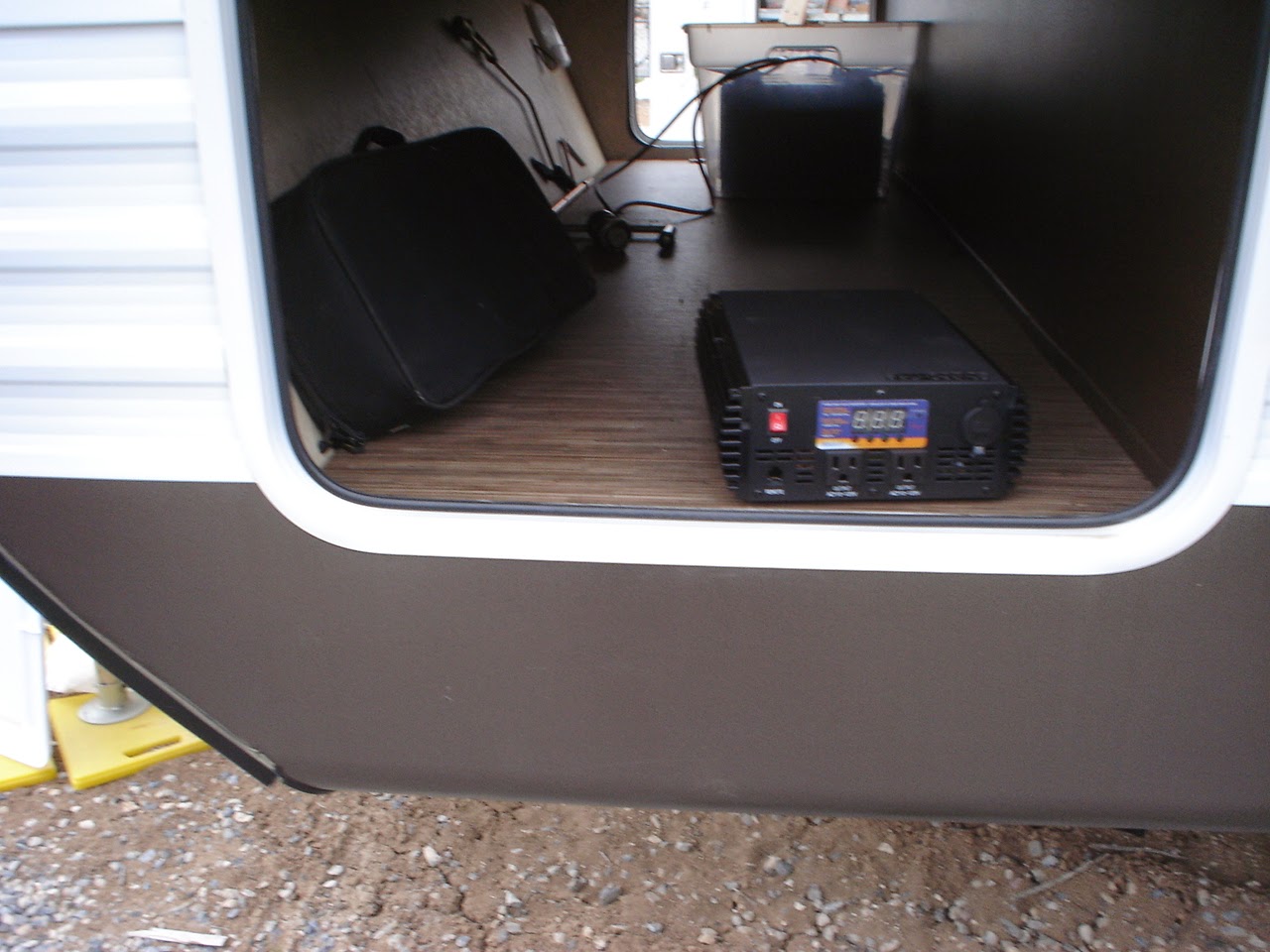 I won't be testing out this set-up for several weeks.  If I find problems I will post them in this blog under the solar label.  Be sure to follow and check back!
Posted by Cheap Meals for the Big Eater at 5:43 PM