The primary reason we camped two weeks at Borax Bills was so we could visit my brother and his wife and kids in the Los Angeles area.  We were finally given the okay to visit him last weekend.  With our semi-annual visit out of the way it's time to travel northeast.

We want to head towards Utah via Pahrump Nevada.  Pahrump is where we had our home before we went full time.  It's where our mail is delivered, and my mom's church is here.  It's also at a high enough elevation not to be too hot right now.  It's a good place to finish out the month of May for us.  I didn't exactly know where we were going to boondock, but I knew the area well enough to know we could figure that out once we got here.

However, Pahrump was an over 3 hour drive away.  I don't like driving so long to get to one camp.  It's rough on my mother who drives our SUV behind me.  It's also rough on the budget.  Gassing up two vehicles (especially in California) is a huge chunk of change.  Since we always have to be somewhere anyway, I say let's spend one dump cycle at a midway point.  It stretches out the journey and lowers the amount of gas we use to fuel our lifestyle by adding days between refueling.

That was the plan anyway, but how?   God, I tell you, it is a pretty pathetic state of affairs when you get into inland California.  I'm talking the Mojave desert east of LA.  We wanted to stay somewhere where we could buy groceries from an actual supermarket, not a little mom and pop affair where bread would be $6.  We were bone dry on provisions when we got home from visiting my bro.  We also wanted a boondock.  If we camped at an RV park that negates the savings we'd make on fuel. 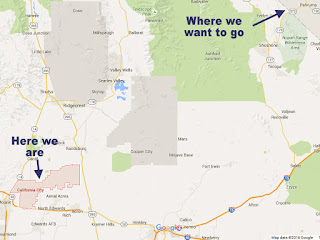 There were two ways to go from California City to Pahrump.  The high road has ZERO metropolitan areas.  It's all tiny little settlements of a few hundred people, and a gas station if you're lucky.  If we were cool with going this direction I would have stocked up with groceries at the Stater Brothers outside California city and boondocked in Searles Valley. 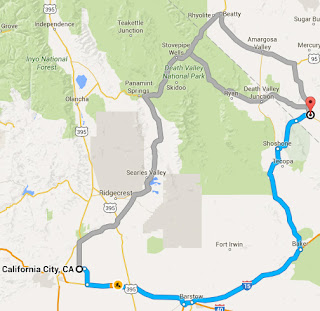 I'm not fine with taking the high road, however.  Death Valley is already in 3 digit temperatures.  It's the hottest place in the United States.  I do not want to drive through there in May, with my cats baking in the RV behind me.  Searles Valley had to be baking too.  It's a VALLEY.  The lower the topography the hotter it is.  I wouldn't want to spend four days there.

That left the low road, which is better anyway because it's more direct.  The only Metropolitan area between Cal City and Pahrump through this route is Barstow.  And let's face it people...no one wants to spend any time in Barstow.  I'm happy to go to the Popeyes chicken place every time I drive through (fricking love Popeyes) but I don't want to stay there.  There are no good, safe boondocks there anyway.

The next modestly populated town is Baker, but it's tiny and has little to offer.  On top of that my theory is that the town is called Baker because it's always baking.  The world's largest thermometer is it's main attraction.  It was reading over 100 degrees when we passed through.

So, SCREW IT!  We drove all the way to Pahrump.

My cat Sultan is not doing well.  The vet says he has arthritis in his back hips and it's just been getting worse.  He has a lot of trouble walking.  When we drive he usually hides under the dinette.  For some reason, this time he decided to go behind the couch.  And he jumped from the top of the couch, not the armrest.  I cringed as I started our journey to hear him plop with flailing legs.

When we arrived in Pahrump he didn't come out for dinner.  But neither did our Tortie, Precious.  Some times they take a while to decompress after a long journey.  We opened all the windows and left them to buy groceries (and mothballs, grrr...my favorite shirt!).

So now it's evening and he's still not coming out.  We hear him clawing desperately, trying to climb just with his front paws.  I squeeze my arms behind the couch and dig him out.  Poor baby.  He drank a cat bowl's worth of water and ate all the food in his dish.  I hope he realizes he's too old to be going places where he has to climb out.  How old?  Well...we got him in 1999 and he was not a kitten.

Okay, so after taking a left in Baker we headed up to Pahrump via Shoshone.  Shoshone is where my mom would drive to buy California lotto tickets when we used to live in Pahrump.  We stopped there for her last batch of tickets for a while (she's a woman over 60, she buys lotto tickets, it's the law).

I mentioned to her that as we drive up highway 372 on our last leg to Pahrump we should keep our eyes open for possible boondocks.  I know that this is BLM (Bureau of Land Management) land because there's a huge sign on the south side that says 'Your Public Lands.'  That means BLM and that means we can camp free for 14 days.  (Right?)

As we're driving I see a little level area off to the side of the road RIGHT BEHIND the 'Your Public Lands' sign.  SWEET!  I plan on making this our boondock after swinging into town to buy propane.


This is too close to the highway to be a proper campsite.  It's just a small open area of dirt with some public works ditch to the side.

I have driven this highway many times when I lived in Pahrump to ferry my mom for her lotto tickets.  I've never seen anyone camping here.  I'm still confident that I'm allowed to camp here because of the 'Your Public Lands' sign right beside us.  Still, it's not an ideal camping spot if you didn't want to be here for some reason.  Too close to the road meaning noise and less safety.  No hiking.  No amenities.  (But close to Death Valley). 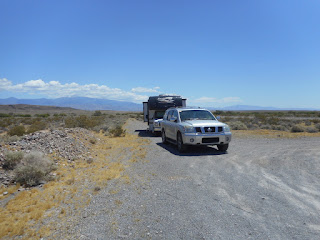 AND YET...this fricking morning two matching class C Leprechaun motorhomes pulled in here looking to mosy up beside us!  ARE YOU KIDDING ME?!  They saw me camped here and apparently thought I had a good idea.  They drove around the little area several minutes looking for a level spot for both of them.  This little cropping of dirt could probably support one more camper, but not three.  They ended up moving on.

I COULDN'T BELIEVE THAT!


Posted by Cheap Meals for the Big Eater at 1:15 PM