I'm updating a lot lately.  Sometimes it's to procrastinate from my writing, other times, like now, I've just put out something new and am taking a break before writing something else.

So my mother is convinced that the house 300 yards from us was blasting floodlights into our back window last night.  I did not witness this, so I can neither confirm or disavow. I'll take a look tonight to see if it happens again.  I'm hoping she was mistaken, and these were some motor cross lights for night riding or something.

But if it is a passive aggressive home-owner it's probably a good idea just to move on.  This is their  home turf, and we're transients passing through.  It's not worth the battle.

When we were getting rid of our trash at the Borax Bill Building I wrestled down a worker in a white truck and asked him if it was okay for us to camp where we are.  He said as long as we're not blocking trails or roads we're fine.  I asked about how to buy a pass for the dump station.  He said to just go ahead and dump and then pay for it when the office opens.  Nice!  I felt a lot more welcome here after that discussion.

So, we still decided to investigate other boondocks in case this home owner started messing with us in less subtle ways.  In front of the dump station (which is several miles down the road from Borax Bills) was a map that indicated what was private property, off-limits nature preserves, or BLM.  We want BLM.  That's Bureau of Land Management and we can camp free on such lands for 14 days at a time.

The only BLM with level clear boondockable land within 20 miles of the dump station was the area off the prison that my mother protested about previously.  It's actually a good base for us, halfway between the dump station and Borax Bills (where we will still need to go to take water and take showers).

We drove to the prison boondock area again and looked at it more in depth.  The trailers parked there seem to be uninhabited.  It's trailers with no tow vehicles attached.  Fifth wheels with no trucks attached.  A Class A on blocks.  We get the feeling that this is a camp for employees of the prison.  Well, that's fine.  There was plenty of level spots left if we want to go there after our next dump.  I think I finally sold my mother on the idea.

I'm still going to double check to see if the flood lights really was the nearby homeowner or just lights from the main motorcross area.  We really like the spot we have now.

So I just finished a story and wanted to get out and away from the RV for a day.  We set out for no where in particular.  Further down Twenty Mule Parkway (where Borax Bills is) is the skeleton of an unbuilt ghost town.   It's just subdivision blocks with posts with street names.  This was supposed to be a suburb of Los Angeles but it never panned out and the subdivision lines just sit there, unused.   I didn't take any pictures.  You can learn all about it here:


After that we went to a few stores to get new wiper blades and random stuff.  There's not much to do here.  My GPS said there was a casino 35 miles away though...

Ahh...California casinos, how I loathe you.  It was a card house.  Card houses are mostly a poker room with a table or two of blackjack and 5 card stud.  I don't know why these are legal but slot machines aren't.  This card house charged you $.50 a bet.  So if you wanted to bet $5 you had to put down $5.50.  -_-  I never saw such crap before.  We promptly left.  My mom can't play cards anyway, so I wasn't planning on staying long.

In California we find the most screwy casinos.  The only slot machines appear to be on Indian reservations, except for the barely legal 'sweepstakes' machines we found once in Hollister.  Even the Indian casinos are dodgy, with cameras in the stalls of the bathrooms (too high to film ass, but still) and some weird card method of Craps that keep you from manipulating your rolls.  Something literally so hard to do that no casino needs such a fail safe.  Lame.  But also good.  My mom and I need to stop gambling anyway.

The area we're in, Mojave, Lancaster, Palmdale, California City, and Barstow, as well as even more area radiating around this area, is extremely economically depressed.  I went into a supermarket today with items spilled on the floor, filth, and dubious puddles near the meat coolers.  It was mobbed since EBT payments had just come.  It's depressing to see so many people struggling to get by.  It's a 'only one shoe' kind of town, which is something I learned from a brief childhood period living in Texas.  If you have only one pair of shoes, and you lose a shoe, then you're going out in public with only one shoe.  There is no place in this town where you can buy a pair of shoes.  There's no Goodwill, no thrift shops, no Walmart or K-Mart.  If you want shoes you have to drive 20 miles.  If you don't have a car because you're on public assistance and can't get a job (because you don't have a car) then you're going to be going around with one shoe.  And there was a one-shoed person in the store today.  It was a flip-flop.

The California towns we're in and around now are not just blighted with poverty, but also decay.  We see so many abandoned houses in the middle of fields of scrub brush that are concrete shells with their roof caved in and graffiti all over them.  If you've ever driven through Barstow to get to LA you know what I'm talking about.  Barstow is the capital of the abandoned building shells.  This is recent decay, however.  People were living in those homes in the 70s, 80s, and perhaps some in the 90s too.  This area of California has decay from much older and cooler looking eras.

We were exploring after the casino debacle and saw what looked like a massive complex attached to the side of a mountain.  It turned out to be a derelict mine, probably from the 50s or 60s, with a derelict mining town beneath it.  And I tried to take pictures.  One day I'm going to learn how to zoom my camera.  These pictures are awful, sorry. 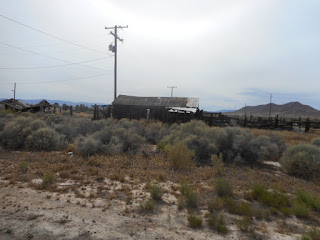 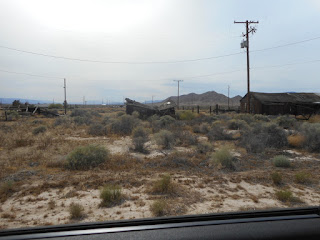 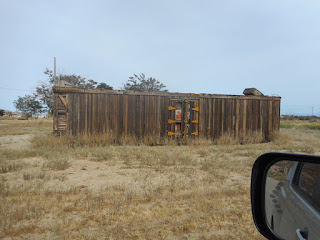 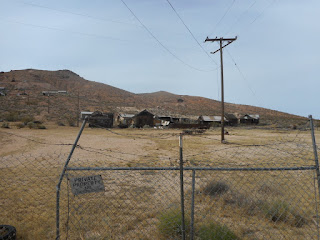 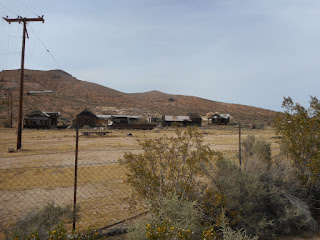 We weren't looking for this site, we just ran into it.  And that's just the area that we were in.  Old decayed sites abounded.

Please take note of the mountain in the last picture.  Do you notice anything about it besides the old mine stuff?  It's a typical mountain in this area of California.  An ugly one.  Grey and gritty with ugly scrub brush all over it.  Not majestic in the least.  These mountains suck and they are blocking the foreground of my view on all sides.

I was going to go north after this boondock for a summer LTVA (Long Term Visitor Area) south of Fresno.  Today I decided...screw that.  We did California last summer.  We liked Palm Springs and Acton.  We liked being near LA for a while.  We didn't care for much else.  Why would we do California again?  The heck with that.

We're going to stretch this current boondock out for a while, but when we leave we're going East.  I'm not sure where yet...but I'll figure it out.