At Borax Bill's in California City

We have trouble with our RV shower.  I don't mean that it doesn't work, or anything like that.  I mean it's tiny and we're big.  Hence, when we try to shower in it we hit the knobs to turn on the water and end up getting very cold or very hot all of a sudden.

On top of this, boondocking with our tiny tanks makes showers in the RV a nuisance.  We get four days to a dump...BARELY.  And I really mean that because we ran out of water on day four at Hole in the Wall and had to fill up a jug of water to use it to flush the toilet.  Said toilet was also filled up to the top of the tube that leads down to the black tank.  This situation gave me nightmares...literally.  I was having fitful sleep all night knowing we were out of water and full of poo.  Ugh.

So if we add showering in the RV to our routine, we will have to dump and take on water even more often, and we'll run through our propane really fast (which we can't ever run out of because it powers our fridge) AND on top of all this showering in the RV unpleasant, because, as I said, we're fat and the shower is small.

In my last post about the Avi Casino I mentioned that the nasty workers at the KOA there would not sell us a shower.  And yeah, we've been using wash clothes since then.  It sucks.  My mother has very thick hair that needs to get washed regularly.  We were both ready for a shower yesterday.

I'm going to mention that neither my mother nor I have B.O. and you would not be able to tell that we hadn't bathed aside from our weighed down hair.  We're lucky that we can get by with one or two showers a week without killing any houseplants.

The showers is part of the reason I picked Borax Bills.  I'll go into what this place is in a minute.  For now let me say, we chose this destination because it has token showers, our most favorite showers of all.  You have to buy the tokens at the building in the campground.  It closes at four.  So yesterday we still couldn't shower because we got here so late.

This morning I got up early (for me) at 9:38am because I was so ready to take a shower.   But when I got to the building where you buy the tokens it was closed.  And...then I read the sign that says it's only open Thursday, Friday, Saturday, and Sunday.

I'm sorry, but I couldn't wait even one more day.  I searched for the nearest TA Center (truck stop, gas station, shower place) and headed for it.  We'd pay $25 for a shower at this point if we had to.

I drive 21 miles and the TA Garmin sent me to is a withered shell of a building with the gas station canopy caved in.  I really hate her sometimes.

I noticed there were a lot of Patel Motels in the area, so I decided to hassle the various owners until one sold me a room for $20 for an hour.  The first guy said no.  The second woman said yes!  BOO-YAH!  We got a hotel room for one hour for $20.

It was DISGUSTING.  It smelled horrible.  It was filthy.  There was white unmentionable stuff on the bed cover and curtains (the CURTAINS).  But honestly, we made it work.  I thought I'd pulled this off.

But then my mom got scalded because of the stupid old fashioned spigots.  She cursed in Spanish (something she only does in primal terror or pain mode) and had to jump out of the shower.  It was horrible to have to hear from the other side of the door.  She eventually got it to non-scalding temperature and left it on so I wouldn't suffer the same fate.  We both showered and got the heck out of there.  From now on I'm going to get the water ready for her whenever it's not easy for her to get out of the way of the stream.

So, yeah.  I need to come up with a better solution for our shower situation.  Boondocks with showers are few and far between, and even if you find one you run into the problem we have.

That said, I'm really liking this boondock.  Borax Bill is a motor cross park.  It has hundreds of acres of trails where kids on dirt bikes can fly their bikes in the air and stuff.  They make their money selling permits to said kids to use their trails.  Except on the weekdays apparently...but anyway, there is an RV park with spaces at the main building which are free to camp in and give you free water.  If you want electricity you have to pay.  It's paved, level camping with free water.  DOOD.


I didn't pull us into one of the many free spots.  When I got here I really didn't believe the spots were free so I drove into the motor area and found a boondock in a wide area of dirt away from any marked trails.  I'm on private property, but the owner is tolerant of boondockers (so I've heard).  I will check in with them on Thursday to make sure it's okay to be where I am.  In the meantime I did confirm that those sweet swanky spots are indeed free unless you need electricity, which we don't.

I think it's okay to be out in the dirt because I see other campers here and there in the distant trails.  These aren't people with bike trailers or toy-haulers with bikes in them.  I see the signs of other full-timers:  solar panels and blue boys strapped to the rv ladders (blue boys are the portable dump tank things).  I'm sure they found Borax Bill the same way I did, at freecampsites.net.  It's the perfect temperature here, not freezing like it was in Hole in the Wall, and not sweltering like it was in Lake Havasu City.

You'd think that the issue would be all the noise from the motor bikes.  Well, if I got one of the swanky RV sites near the building I would probably be bothered by it.  Behind the building are these hilly trails with all sorts of bumps for crazy people to jump their bikes into the air from.  That seems to be the popular area.  Out here the trails are flat and easy.  Boooring.  Only one or two bikes have been by.

When we went out shower hunting I noticed a BLM boondock by the nearby prison.  I drove down there and took a look.  Then I said to my mom, "We'll move here after we dump next time."

"Why can't we stay were we are all by ourselves?"

I guess she has a point, but avoiding people wasn't really my primary objective in life.  Finding a safe level boondock that I know for sure is legal is.  I guess she's right though, if they tolerate us on the private property then there's no need to move.  We'll find out Thusday when they open (and we get to shower again). 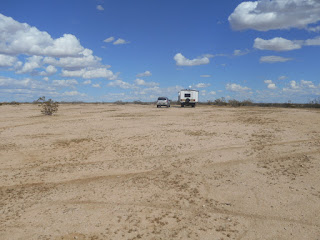 By the way...I have another book out.  If you like smutty sci-fi romance with a sweet loving vibe and a happy ending I hope you'll check it out.  It's only $.99 or free with Kindle Unlimited: 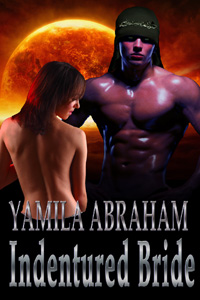 Posted by Cheap Meals for the Big Eater at 8:19 PM