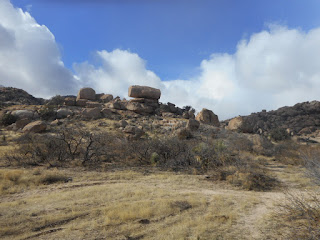 We left Catalina State Park yesterday morning and headed east to a place halfway to Deming New Mexico, which is our intermediate travel goal.  This is Indian Bread Rocks, a recreational area on BLM land care of http://freecampsites.net.

As we were driving here there were electronic bulliten boards over the highway that warned of severe weather through Monday.  That doesn't mean snow down here, but severe winds and rain.  It hadn't started yet as we were driving.

We made it 100 miles to the spot.  Passed a Border Patrol sentry at the dirt road leading in, and drove miles down dirt roads that I worried would soon become impassable.  We didn't have much choice at this point.  The storm was rolling in.  Severe winds are not what I want to be driving the RV in.  It would have been no picnic for my mom in the follow car behind me either. 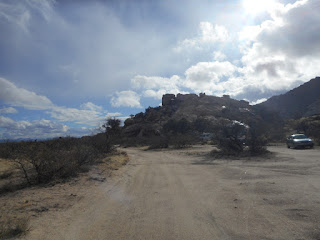 We finally get to the GPS coordinates and it's a small parking lot next to a dirt pull out.  @_@  what the heck?  I thought this was a big BLM area where you could camp multiple RVs!  And in fairness, it might be, because I didn't go further down the road. I pulled into a little grassy patch and tried to make us as level as I could.  (We're not level at all.) 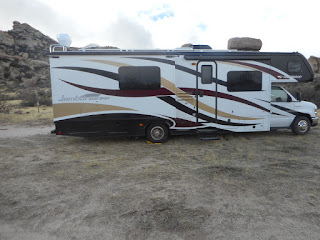 All night long the rain and wind pelted us.  The RV was freezing inside.  My mom is on blood thinners due to a rare form of lupus.  She gets cold much faster than me.  Add to that, it was our 'fast' day.  We weren't eating.  She insisted I turn on the RV heater.  I'm scared to waste propane when we might get stranded here, but I cranked it for a little while.  She was turning blue.  ;o;

The next morning we saw the road was still intact and the sun had peeked out.  I went out to take some pictures for the blog.  That's when I saw two other campers had joined us!  Apparently this is the right spot, or my being here made it the right spot.  Who knows.  (Sometimes I think I blaze a trail and others follow, but that's probably egotism.) 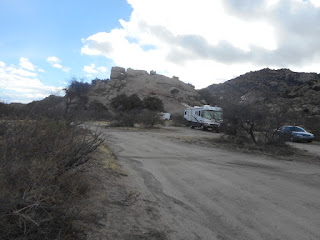 We're here until at least Monday, because I'm not driving in this weather.  It may end up longer depending on how bad these roads get or if there's a flash flood.  Wish me luck!
Posted by Cheap Meals for the Big Eater at 9:40 AM