So we're in Paicines California at the Thousand Trails San Benito park.  This is getting somewhat North in California, near San Jose.  We felt we should go north during the summer so that we have cooler climates.  That's not really working out, though.  It's sweltering here. 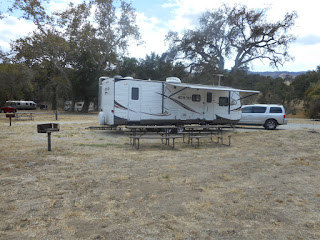 It seems that every California Thousand Trails park north of Santa Barbara has issues.  The majorly off-putting one for me is the lack of sewer connections at most of the parks.  We need to dump every seven days.  I've measured this.  Other people may need to dump less, but this is what we need for our situation.  That means I can't go two weeks at a park without sewer.  I'd have to move the rig to the dump station every seven days.  What a pain in the butt!  Seriously, forget it.

I was warned not to go to San Benito by a camp host who was trying to sell me an upgraded membership.  He said there are a lot of tent campers here and I may not like that.  Huh?  Um...who cares?  Incidentally, I haven't seen any tent campers (but as I said, it's sweltering).  I think he was trying to come up with a not so negative reason why we should avoid this place rather than stating the truth:  There is a major electrical problem at this camp.

A lot of reviews online mentioned this.  Most of the unoccupied 30amp spaces have red dots painted on them, indicating that they are broken.  -_-  We did find a spot that didn't have a dot, or shade, and was mostly grown over.  But I pulled in anyway and set us up here.

I've had electrical problems from the get-go.  My converter is struggling to draw amperage, making the cooling fan run on high constantly.  Then around 11am we lost power.  -_-  It was 85 degrees and very humid.  The thought of moving the RV just made me sick.  It was so hard to find even this spot, and this supposedly functional electric pedestal didn't even last a day.  How long would the next one last if we did move?

Ugh.  Well I wandered around with my surge guard testing it on other spots.  Some long-term residents saw me and gave me advice.  They seemed to think I could tell someone here that my electric went and it would be addressed.  I assumed the opposite, since the park allowed so many spots to just break and stay broken.  However, they hailed a golf-cart riding camp host and within an hour we had electric again.

@_@  Gosh.  That was good.  Maybe this place isn't so bad?  Sure my converter fan is running non-stop, but at least I have Air Conditioning and a sewer connection. 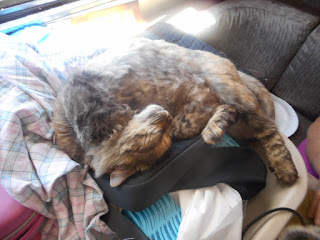 There's lots of amazing wildlife here, also.  We have big flocks of quail running around with their silly hats and red-headed woodpeckers.  As we came in late last night after driving to Stockton to finally sell the tow dolly (yee-haw!) we saw deer and two little foals sipping a puddle made by a leaking spigot.  That was breath-taking.  We saw several more deer as we drove around for 20 minutes like morons trying to find where the hell our RV was in this massive maze-like park.  The wild-life is neato.  Deers and bunnies everywhere!

I've gone ahead and changed our reservation so that we stay here for three weeks.  I've exhausted our gasoline budget.  Since the park is working reasonably for us we may as well stay until I get my next infusion of royalties from Amazon.  (That's my monthly pay, what I life on).

Posted by Cheap Meals for the Big Eater at 2:32 PM