Apparently Life Magazine said the portion of Highway 50 that goes through Nevada is 'The Loneliest Road in America.'  All the highway signs have this written on it like it's a good thing?  (I guess?)
Meh.  I think the road from Las Vegas to Reno is 'lonelier' and a longer drive by several hours, but this road is more famous because it used to be the Pony Express.  Why am I talking about Highway 50?  I'll get to that...

Yes, we did the Cardinal RVing sin of staying at an overnight truck stop for two nights.   We were out of the way, there was plenty of room, and we spent lots of money at the gas station/store/restaurant.  Before anyone says, 'The reason there was alot of room is because other RVers respect the rules,' look at the pictures in the last post.  It's a dust pit.  Our RV got caked with the dust.  Loud trucks surrounded us and infused our air with the essence of diesel.  No fool would stay in such a place longer than they have to except for us.  And we needed the rest.

So now I needed to decide where to go.  I looked for Passport America RV parks.  The nearest ones were Tonopah to the west or Elko to the north.  I picked Tonopah since we want to go west to get to Carson City eventually.  The Passport America park there had loads of 1 star 'if you value your life don't stay here' reviews.  Ugh.  So Elko then.

Elko (or Wells near Elko, rather) had two parks.  The choicest one was fully booked.  The 2nd choice had a disconnected number and didn't reply to my email.  Both parks only had 20 spots so I didn't want to go without a reservation.  Since I couldn't reach anyone, Elko was out.

UGH.  Where the heck do we go?  We need showers and to dump tanks.  I spent an hour looking at all the parks between Ely and Carson City.  Too expensive.  No shower.  Racist owners?  (What the heck?)  Too expensive.  Too far out of the way.  AHHH!

I find an RV park in Fallon Nevada attached to a casino (mom will be happy) and only $15/night (Milly will be happy).  But it's a four hour drive, and no showers.  AHHH!

I don't really see many other options.  In Ely there is a truck stop on an Indian Reservation (Native American Reservation?) that has showers as well as a free dump station with free potable water.  I figured if I dumped and got water and showered there I could head West with a little more room for winging it.

But I don't dump.  My mom and I just went there in the car and showered.  When I told her I wanted to go to a casino RV park in Fallon she said she would suffer through the four hour drive.  So...why dump when we'd be at an RV park that night?

Silver Sage Truck Stop in Ely is a great place to shower.  $8.50 allowed my mother and I the use of a handicapped shower where we took turns.  Okay, shower done.  Now we don't need an RV park with a shower.

And so, we got onto Highway 50 and would be driving almost the entire stretch, from Ely to Fallon in one day.  Oh boy.  At least this would be our last long drive for a while.  Carson City is less than an hour away.

Before our fiasco with the SUV mechanic I had a plan to visit all the old west towns in northern Nevada.  There was a lot of mining in the 1850s and a lot of stuff is left over from that era.  I enjoy going to museums, checking out old buildings, reading historical markers--that's my thing.  But the lack of campgrounds in this area that meet my cheapo criteria, along with some major heat, got me to forget that plan.  We just want to get to Carson City and have RV hook-ups and amenities for a month.

HOWEVER...we did pass through Eureka today, which is said to be the best preserved old west town in Nevada.  And, dang it, I demanded a pit stop!  So here we are! 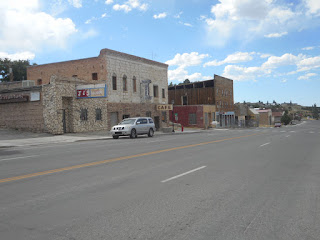 Okay!  I hope you enjoyed your tour of Eureka.  We spent all of half an hour here to picture up the blog some.  I wish I could have at least gotten into the museum.  It was late though.  My mom can't drive after dark.


Posted by Cheap Meals for the Big Eater at 9:11 PM