Okay my lovelies!  I'm at a new dry camp and it's time to report.

So we ended up staying for two tank cycles at that nice BLM on highway 95 in Lake Havasu City.  We dumped at the Lake Havasu State Park, down London Bride Road (where a real London Bridge was brought piece by piece to Arizona...but really isn't much to look at)

The dump situation at Lake Havasu Park was great, because on a weekday you can get a pass for $10.  We assume this includes use of the facilities, so use them we did.  They have a nice two bay dump station with a trash dumpster and potable water.  After dumping we pulled over to the RV park and used the showers.  We did this for two dumps.

The park itself is beautiful.  Right on Lake Havasu with boat launches and a big fish cleaning station by the dump station.  Both times we dumped there were guys their cleaning and filleting their fish.  Man...I want to fish so bad, but today we're in Nevada, hence I knew I wouldn't get the value of a $55 fishing permit.  We're on our northward migration.

So we liked the BLM boondock enough to stay for seven or eight days, but today we just had to get out of there.  I met a lone male camper, 53, who was recovering from a stroke and doing pretty good.  He was very lonely and had an unwieldy rig set-up with a 45' Class A that towed a 15' trailer.  He was not legal for California, since he was so huge.

I'm usually (not always) a friendly happy-go-lucky person who is fine making friends with my neighbors.  My mom and I are also very caring and generous.  We want to help people, but we can't get wrapped up in this.  We have our own lives, our own routines, and we allow ourselves to get taken advantage of if certain personality types get too close.

We were happy to take him with us when we got groceries.  After that we wanted to stay put for the next few days.  But...his bike broke down and he needed to go into town again.  So we took him on a day when I really wanted to be working writing.  Then he had to do laundry and I sent my mom with him.  He was inconsiderate to her in the laundromat, making her (a disabled woman) carry his detergent by sneaking it into her basket.  And then he didn't hold the door.

At the same time he started making more physical contact with me than I'm comfortable with, which is a situation I've run into with a long of single men I make friends with.  I'm not flirting.  I'm polite.  But they're veering conversations towards sex and hooking up at every opportunity.  Trying to get me out alone (sans mother) and then the touching starts.  Clutching my shoulder and arms 'jokingly' while making a point.

I write romance, but I don't have a romantic bone in my body and I'm not looking for a hook-up.

The final thing that made us run was him declaring that he would be caravaning with us now.  Not asking.  Telling us.  This is the sort of person he was.  Not a terrible person, but someone who was accustomed to getting what he wants without considering what the other person wants.  He was used to women taking care of him and eager for more of the same.  We told him we were leaving Friday, but left today since we were out of water anyway.  I didn't say goodbye.  Hopefully we won't run into him again because I'm sure he was enraged when he saw the empty place where we were.

He can't follow us without taking a long route because we went north from Lake Havasu City to Laughlin, taking the 40 through California for part of the trip.  He can't even sneak up that road since he's too big and there's an inspection station stopping all vehicles along the way.

The lesson here is not to invite single male travelers into our lives.  The are naturally lonely, and as a young female full-time camper I am appealing to them.  We aren't going to be inviting such campers over to eat or taking them on excursions with us.  It just leads to clinginess.  We are happy on our own.

Now we need to start heading West, and I've been saying that for a while, but the Western boondocks from Lake Havasu just didn't appeal to me.  I decided to go a bit farther north and decide where I wanted to go after a casino break.

We found what looks like an AWESOME casino boondock.  Mind you, we've boondocked in Laughlin before, back when I had the trailer.  There's plenty of blacktop boondocking.  But we aren't just passing through this time.  We wanted a destination to spend one or two tank cycles at.  That means being close to a dump station.

We're at the Avi Casino in Laughlin.  This has to be the best casino boondocking situation I've seen to date.  They have a gigantic hard packed sand lot just for dry campers.  There are trash cans provided!  And right across the street is our $5 dump station an potable water.  HELLS TO THE YEAH! 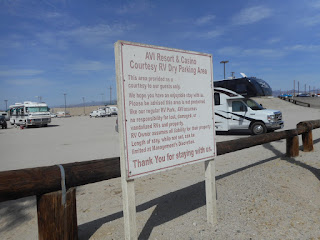 Hopefully this will be nicer than our last casino boondock fiasco.  We just got here and haven't gone into the actual casino yet.  I'm parked right at the front of the lot so we can walk there.

I booked Sunday night at the casino hotel since it was only $40 all together (including taxes).  We'll enjoy the casino hotel for a day and I'll try to get some work done.  This isn't an economical shower option for us by any means, but for $40 I think we can splurge.

It's hot today, but should be cooling off tomorrow and onward.  We may stay here for two tank cycles again.  :)

Posted by Cheap Meals for the Big Eater at 3:35 PM