Hole in the Wall

So today we escaped the noisy (and with one very obnoxious dealer) Avi Casino.  We need to go west because our goal is to visit my brother and his brood in LA (Los Angeles, not Louisiana) before it gets too hot to be this south.

We escaped not a moment too soon, because it's bike week.  The first sign was a man showing another man how loud his bike's stereo could go next to us in the dry camping area.  He let it run for several minutes because the biker gang insignia on the back of his leather jacket is a pass to do whatever he wants.  I was still getting ready to ask him to turn it down before he went ahead and shut the God-awful racket off.

We dumped and took on water at the KOA across the street from the dry lot.  I asked if I could purchase (PURCHASE, mind you) some showers.  I was rudely told no, with the added trivia information of the showers being for their guests only.  Not really information I'd asked for or needed to know.  I was a guest there two days ago, but I will definitely not be one again.  Enjoy your bikers.

As I was dumping two more bikers pulled in to the KOA.  Their stereos were low.  They rose the volume all the way up as they drove past me.  In the United States this is how uncouth men harass women.  I did not look at them.  Nope.  No matter how slowly they drove, going out of the way to go through the dump station bay instead of the other road.  I never turned my head toward them.  "HA HA!" --Nelson  "You get nothing!" --Willy Wonka.

I get it.  You are God's gift to women because you're a bad boy biker, and a female who dares to be outside alone in your frame of vision is supposed to acknowledge you.  Gape in awe at your coolness.  Make you feel like really big bad men on your big bad motorcycles.

Sorry, but I'm trying to dump 35 gallons of human feces.  Maybe I can stroke your fragile male ego some other time?

These are bike gang members, not some guy riding a bike on the weekend to feel the wind through his hair.  I was a ghost writer for former bike gang member who found Christ.  He described the lifestyle to me ad naseum.  It did not leave a good impression.

Moving on...quite literally.  I was headed for a BLM boondock in San Bernadino county (not sure on the city).  It was a much longer drive than anticipated and I regretted not feeding my mom before we left.  Garmin, my GPS and frenemy, said 48 miles.  It was more like 70.

We'd planned on boondocking on a dry lake bed.  The road to it was too rough.  We ended up instead at a pay campground called Hole in the Wall.  https://rvdumpsites.net/#!21224&query=sitedetails

It's a beautiful camp site, but it ain't free. 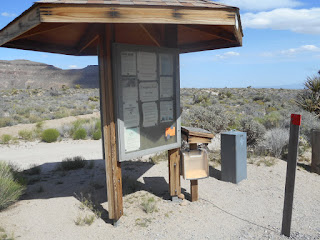 I don't know if you can see that, but it says $12/day.  TWELVE DOLLARS A DAY?!  What am I?  The Queen of England?!  But wait...there was a little small print that said it was half-price with an access pass.

My mom has an access pass!  WHOO HOO!  Six dollars a night!  (A nice guy at a National Park in Nevada gave it to her because she's handicapped.  We almost forgot all about it).

SIX DOLLARS A NIGHT IS STILL TOO HIGH!  (Says the girl who tried to spend $100 at a craps table before the obnoxious dealer told her to get lost {long story}).

But we're sick of driving and I don't want to try to go down that sketchy road again to the boondock.  I paid for four days.

So yeah, a lot of people who read this blog come from my Facebook and don't know how to camp in a National Park or Reserve (or whatever).  So that picture up there is of the self-pay maker.  It tells you how much per night.  On the post to the right is a bucket full of envelopes.  You fill out the envelope with your license number, spot number, number of nights you want to stay, name, and whatever else.  Then you put cash or a check inside to pay.  You rip off the tab from the envelope, which you also copied your details on.  The sealed envelope goes into the metal box.  The tab goes on the post with the number of your campsite.  You pick whatever site you want usually.  There's no reserving. 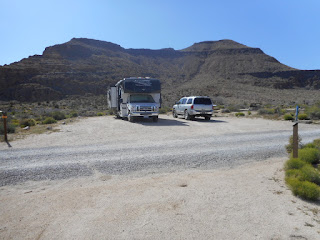 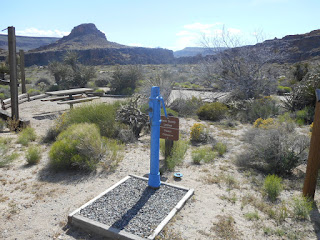 Here's our site.  It has a fire pit and two picnic tables.  No hookups (not for $6 a night people) but it does have an old-timey water pump which I plan to use to do our laundry.

Also in this camp ground is several pit toilets.  What's a pit toilet?  I guess there's a pit under the toilet.  I didn't look down the commode.  I get grossed out easily. 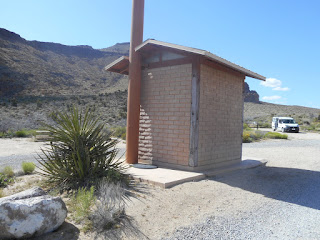 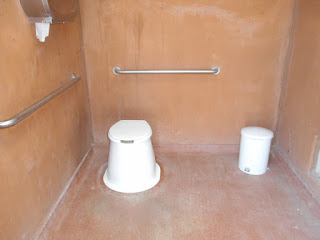 The campground is GORGEOUS.  I mean, postcard worthy views on all sides.  Now I'll destroy what your imagination comes up with with my craptastic photos.  My camera sucks...but I'm cheap. 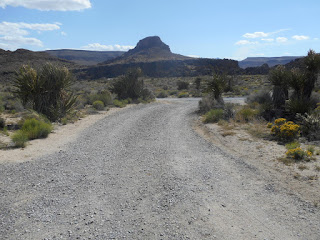 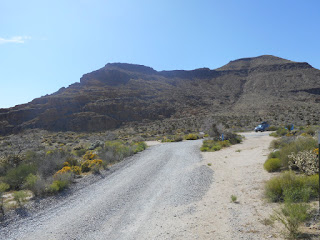 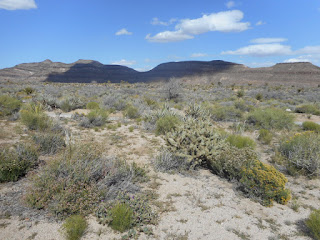 Okey-dokey.  We're here until Saturday, then onward to the west.

It's worth noting that if you come out here you better be well stocked on everything you need and have plenty of gas in your tank.  There's a dump station and water, but 30 miles from the nearest anything.
Posted by Cheap Meals for the Big Eater at 4:29 PM