We're at an RV Park

I am writing this at the KOA at the Avi Casino.  Yesterday was very hot, and we toughed it out.  My mom went into the Casino until sundown to beat the heat.  I was okay with just a fan blowing.  I have a fan for my cats too, but it wasn't enough.  Sultan came out of his hiding place panting.  Then Scrappy, our long-haired cat, came out and also panted.  There's nothing more heartbreaking than a panting cat.

We're in desert areas.  It's a dry heat.  People say that and you roll your eyes, but it's true that dry heat is much more tolerable than humidity.  I am fine up to 98 degrees with just the fan on me and windows open.  My mom and cats are not.

Since today was going to be another 98 degree day, I drove across the street and splurged on a $30 (all-in) RV spot.  I can't let my poor animals suffer.  This is also cheaper than running the generator all day.

Tomorrow we're back down to a high of 86.  That's extremely comfortable for us.  It gets even cooler Sunday.  We'll go back to the sandlot for free drycamping.  I'll do my normal dump/water/trash/shower routine before we leave to take advantage of amenities while we can.

Last night I was looking up vets to euthanize Sultan.  His back legs were almost completely useless and he had caked himself with urine.  We got this cat when we lived in Massachusetts in 1997.  He was a full grown cat when we got him.  This is a very old boy.  He's my cat, since he bonded the most with me.  I love him more than I've ever loved any cat I've had before.  He's my baby.

Euthanizing cats is always a miserable experience and it's not just because I'm killing a member of my family.  Vets make this so difficult, and they treat you so poorly when you're trying to do this.  I had to put down Whitey, Sexy, and Fluffy before.  With every cat I had the same problem.

The vets don't want to service people who aren't their regular customers.  You're a piece of riff-raff who didn't get established with them.  Oh, and NOW you bring your cat in?  To put him down?  They can't make money off you once the cat is dead. 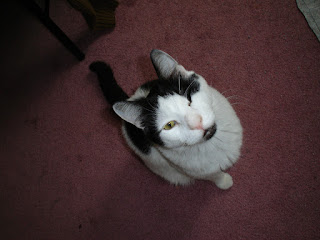 Every time I'm going through listings calling vet after vet, often with tears in my eyes, just to get a rude person on the phone saying they'll make an appointment for me in two weeks.  Zero compassion because they're jaded to this kind of misery.

With Fluffy and Sexy we had to drive two hours to a Banfield clinic in a Petsmart.  For some reason this is the one and only vet I've found who tells you want you need to hear:  Bring them in.

We need a home euthanasia kit for cats and dogs.  I need to be able to give my beloved pet an intramuscular shot myself and let them die peacefully in their home.  This is not a specialized skill that only licensed vets can do.  Don't give me that crap.  I can follow specific instructions on how and where to give the shot.  Is that any more complicated than freezing off a wart with liquid nitrogen?  And I would put down my baby, because I love him with all my heart and don't want him to suffer.

I had to put down an animal before that I could not take to a vet.  This was a young male turkey who had eaten plaster and gotten brain damage.  It was our fault for keeping him in the house where such dangers existed.  We didn't know better.  Now I have a pet turkey who couldn't walk and his head shook so badly he couldn't drink.  Was I going to let him suffer a slow torturous death from thirst?  No.

Ugh...it was a mercy killing.  I tried to behead him with clippers.  My mom was inside hiding, because she loved him too.  I knew that if I couldn't do it she would have to, and I would not do that to her.  So I put his neck in the clippers, but my arms wouldn't work.  I lost strength.  I was killing something I loved and just could close the clippers.  I had to psych myself up for ten minutes.  My mom checked on me thinking I had done it by now, because I killed chickens really efficiently in the past.  Well, not my baby.

Then I closed the clippers and they didn't cut or break his neck.  Dear God...I had hurt him and he was still alive.  I had to do it again and again as fast and hard as I could trying to kill him as fast as possible.  Finally I just had to squeeze and hold until he was finally dead.  It was horrible.  I would have never used the clippers if I knew it wouldn't be one quick swipe.  I still tremble all over just thinking about it.  My poor sweet turkey.

To digress a moment, I know you're thinking who the heck has pet turkeys.  It wasn't our intention to have them as pets.  They just acted like puppies from the beginning and wormed their way into our hearts.  If you want to get meat turkeys do NOT get bourbon reds.  They are cute, playful, affectionate, and will melt your heart.  They love to be pet on their bald little heads and plop right on your lap for a snuggle if you let them.  They also befriended our cats and snuggled/played with them too.

Anyway, the story about the turkey was to show that I can kill an animal I love if I see they're suffering.  I know I can do it, and frankly, I WANT to do it.  If it has to be done I should be the one to do it so they can die in a familiar and peaceful place and without the stress of a car ride.

I go online once again for a home euthanasia kit.  Still does not exist.  Mobile vet?  Yeah right.  Tomorrow was going to be me calling all the Laughlin vets to get the runaround again.  There doesn't seem to be a Banfield around here.

As I'm searching I come across a testimonial about a woman who had a cat who drinks a lot (Sultan drinks tons due to kidney problems) who had it's back legs go.  She said the vet gave her cat potassium and he was right as rain two days later.

Sultan probably did have a potassium deficiency too!  He drinks a lot normally, but in the heat he is going through water like...um...water.

I crushed a potassium supplement and mixed a tiny bit with a bite of food for him.

Dude.  This morning he was a lot better.  Still a little shakey on his back legs, but he's walking again.  He's going to the litter box.  He's begging for scraps.  His head is up.  He's alert.  He's washing his paws and his face.

But he needs to be bathed and shaved, my cat Scrappy too.  That's one of our goals while we're in Laughlin since we'll be heading west towards less inhabited places after this.